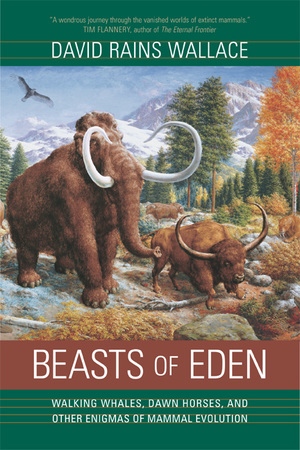 Beasts of Eden Walking Whales, Dawn Horses, and Other Enigmas of Mammal Evolution

Mammals first evolved at about the same time as dinosaurs, and their story is perhaps the more fascinating of the two—in part because it is also our own story. In this literate and entertaining book, eminent naturalist David Rains Wallace brings the saga of ancient mammals to a general audience for the first time. Using artist Rudolph Zallinger's majestic The Age of Mammals mural at the Peabody Museum as a frame for his narrative, Wallace deftly moves over varied terrain—drawing from history, science, evolutionary theory, and art history—to present a lively account of fossil discoveries and an overview of what those discoveries have revealed about early mammals and their evolution.

In these pages we encounter towering mammoths, tiny horses, giant-clawed ground sloths, whales with legs, uintatheres, zhelestids, and other exotic extinct creatures as well as the scientists who discovered and wondered about their remains. We meet such memorable figures as Georges Cuvier, Richard Owen, Edward D. Cope, George Gaylord Simpson, and Stephen Jay Gould and learn of their heated disputes, from Cuvier's and Owen's fights with early evolutionists to present controversies over the Late Cretaceous mass extinction. Wallace's own lifelong interest in evolution is reflected in the book's evocative and engaging style and in the personal experiences he expertly weaves into the tale, providing an altogether expansive perspective on what Darwin described as the "grandeur" of evolution.

David Rains Wallace is the author of fifteen books, including The Klamath Knot: Explorations of Myth and Evolution (Twentieth Anniversary Edition, California, 2003), winner of the John Burroughs Medal; The Bonehunter's Revenge: Dinosaurs, Greed, and the Greatest Scientific Feud of the Gilded Age (1999); and The Monkey's Bridge: Mysteries of Evolution in Central America (1997).

“A thoroughly researched, richly detailed and lively book on the ‘bone hunters,’ who traversed the badlands of the world searching for the fossils of mammals and on the vituperative intellectual battles that some of these paleontologists waged with one another. And as these stories unfold, one becomes familiar with the primary ideas and events in the rise of modern evolutionary thinking.”—New York Times Book Review

“[Wallace’s] fine study deftly weaves together history and science to reveal the origins of our current scientific understanding. . . . Wallace meticulously traces the story of humankind’s attempts to interpret the evidence of fossils. . . . It’s a complex story but he succeeds in bringing alive a bizarre pantheon of prehistoric mammals.”—Guardian

“[Zallinger’s] mural serves perfectly as the organizing motif for David Rains Wallace's fascinating new book . . . which tells the story of mammal evolution and discovery. . . . Wallace traces the study of mammals from the earliest finds to the latest research, making his story come to life with details of discoveries as recent as 2003. . . . Well-written and engaging.”—Seattle Times

“Wallace has talked to most of the experts in the field and brings everything alive and bang up to date by quoting their ideas and arguments. Cleverly, he uses illustrations from Rudolph Zallinger's famous Peabody Museum murals of ‘The Age of Reptiles’ and ‘The Age of Mammals’ to show how ideas about mammal evolution have changed over recent decades. . . . Wallace does an excellent job of enlivening a complex tale, full of the jaw-breaking names of our extinct mammal relatives.”—New Scientist

“As we understand it, evolution is a magnificent -- but unfinished -- symphony. Let . . . Wallace conduct it for you.”—Los Angeles Times Book Review

“If a picture is worth a thousand words, then this excellent work proves that a mural is worth 300 pages. Wallace uses the often overlooked [The] Age of Mammals mural at Yale's Peabody Museum as the theme around which he builds the story of the evolution of scientific thought on mammalian evolution. . . . Paleontology buffs will not be the only ones entranced. . . . [A] charming story, skillfully told.”—Publishers Weekly

"Wallace brings together the best theories here to tell the story of mammalian discovery and evolution. Vivid reports of fossil finds bring some long-gone creatures back to life and aid the author in explaining how the evolutionary process has shaped the mammalian class."—Science News

“[An] engaging, award-winning exploration of the evolution of mammals.”—Toronto Globe & Mail

“Brings the story of ancient mammals to a general audience, drawing from history, science, evolutionary theory and art history to present a lively account of fossil discoveries.”—Dallas Morning News

“Wallace argues that it is mammals—not the flashier dinosaurs—that have led the way to a greater understanding of evolution in general. . . . A nice stroll through the amazing array of unusual species that have populated Earth and reminds us that natural selection runs a close race with chance.”—Library Journal

“Opens a wondrous window on paleontology’s investigations of the origins of mammals.”—Booklist

“Intrigued by the Yale Peabody Museum’s giant Age of Mammals mural since the age of 10, naturalist and author David Rains Wallace has brought the mural to life in a new book about the history of mammal evolution. . . . As interesting as the paleontological descriptions is Wallace’s discussion of the people involved in mammalian studies over the years, intertwining the science with personal and professional disagreements among major players in the field. Not a light book, it is interesting in its outlook: using art to describe a scientific endeavor.”—Geotimes

"This compelling book examines the lives of the scientists whose indefatigable labor in the field and the laboratory gave rise to modern theories of evolution. . . . This is an eloquently written and thought-provoking book that only adds to the author's considerable reputation as a master of the genre."—Bloomsbury Review

“Ties together in an interesting way many of the old chestnuts of vertebrate paleontological lore. . . . Wallace has skillfully woven his tale around the Zallinger art . . . his literary use of the Zallinger frescos succeeds in drawing us into deep time.”—Trends in Ecology & Evolution

"Beasts of Eden is a wondrous journey through the vanished worlds of extinct mammals. Exciting, insightful, and accurate, it is everything that good science writing should be."—Tim Flannery, author of The Eternal Frontier

"A compelling scientific adventure story…. Peopled with colorful and larger-than-life characters, this account of the history of paleontology dramatically demonstrates how the interactions between crude but charismatic fossil seekers, ascetic intellectuals, temperamental artists, and many others have forever changed the ways in which we view life's prehistoric beginnings."—Ian Tattersall, author of The Monkey in the Mirror

"Beasts of Eden is a true delight. Each page drips with the drama and passion of scientific pursuit. Wallace is a keen observer, a learned writer, and a great story teller--this is a must read!"—Don Johanson, Director of the Institute of Human Origins 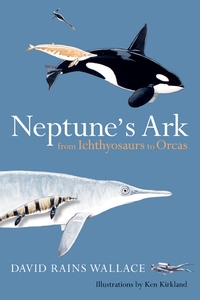 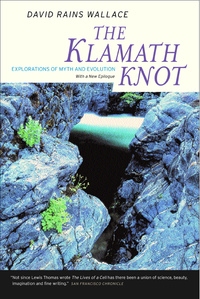 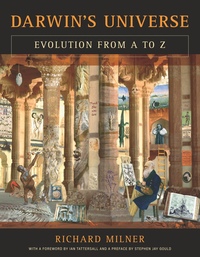 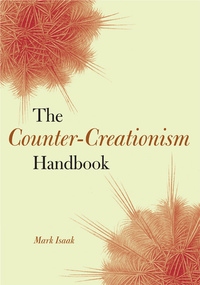 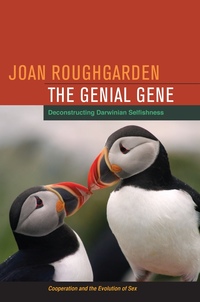