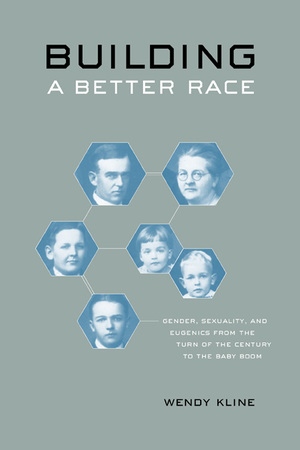 Building a Better Race Gender, Sexuality, and Eugenics from the Turn of the Century to the Baby Boom

Wendy Kline's lucid cultural history of eugenics in America emphasizes the movement's central, continuing interaction with popular notions of gender and morality. Kline shows how eugenics could seem a viable solution to problems of moral disorder and sexuality, especially female sexuality, during the first half of the twentieth century. Its appeal to social conscience and shared desires to strengthen the family and civilization sparked widespread public as well as scientific interest.

Kline traces this growing public interest by looking at a variety of sources, including the astonishing "morality masque" that climaxed the 1915 Panama Pacific International Exposition; the nationwide correspondence of the influential Human Betterment Foundation in Pasadena, California; the medical and patient records of a "model" state institution that sterilized thousands of allegedly feebleminded women in California between 1900 and 1960; the surprising political and popular support for sterilization that survived initial interest in, and then disassociation from, Nazi eugenics policies; and a widely publicized court case in 1936 involving the sterilization of a wealthy young woman deemed unworthy by her mother of having children.

Kline's engaging account reflects the shift from "negative eugenics" (preventing procreation of the "unfit") to "positive eugenics," which encouraged procreation of the "fit," and it reveals that the "golden age" of eugenics actually occurred long after most historians claim the movement had vanished. The middle-class "passion for parenthood" in the '50s had its roots, she finds, in the positive eugenics campaign of the '30s and '40s. Many issues that originated in the eugenics movement remain controversial today, such as the use of IQ testing, the medical ethics of sterilization, the moral and legal implications of cloning and genetic screening, and even the debate on family values of the 1990s. Building a Better Race not only places eugenics at the center of modern reevaluations of female sexuality and morality but also acknowledges eugenics as an essential aspect of major social and cultural movements in the twentieth century.

Wendy Kline is Assistant Professor of History at the University of Cincinnati.

"Historians of eugenics will find much of interest in this book . . . With its focus on gender and sexuality, Building a Better Race adds an important dimension to the increasingly rich scholarship on the history of eugenics."—Journal of the History of Biology

"To the raft of eugenics scholarship that has appeared since 1985, Wendy Kline adds this concise and provocative examination of the gender imperatives inherent in the American eugenics movement. . . . an important book for historians of science, medicine, race, gender, and public policy."—Journal of American History

This volume is a long overdue examination of American eugenics in the context of gender and female sexuality. Kline takes a fresh approach in examining this much-neglected theme by focusing on California, which despite its importance in the history of eugenics is also underrepresented in the literature."—Quarterly Review of Biology

"Wendy Kline has written a provocative and original book on eugenics in the United States that takes gender and sexuality as central and illuminating concepts of historical analysis. She makes several compelling arguments that challenge the existing literature and add to our understanding of the versatility of eugenics during the twentieth century. Most importantly, Kline asserts that eugenics, although severely undermined by Nazi atrocities and seen by many commentators as a pseudoscience, did not disappear by the 1930s but instead flourished due to a heightened concern with female reproduction and the regulation of fertility."—Journal of the History of Sexuality

"Building a Better Race powerfully demonstrates the centrality of eugenics during the first half of the twentieth century. Kline persuasively uncovers eugenics' unexpected centrality to modern assumptions about marriage, the family, and morality, even as late as the 1950s. The book is full of surprising connections and stories, and provides crucial new perspectives illuminating the history of eugenics, gender and normative twentieth-century sexuality."—Gail Bederman, author of Manliness and Civilization: A Cultural History of Gender and Race in the US, 1880-1917

"A strikingly fresh approach to eugenics.... Kline's work places eugenicists squarely at the center of modern reevaluations of females sexuality, sexual morality in general, changing gender roles, and modernizing family ideology. She insists that eugenic ideas had more power and were less marginal in public discourse than other historians have indicated."—Regina Morantz-Sanchez, author of Conduct Unbecoming a Woman: Medicine on Trial in Turn-of-the-Century Brooklyn

List of Illustrations
Acknowledgments
Introduction
1. Motherhood, Morality, and the "Moron": The Emergence of Eugenics in America
2. From Segregation to Sterilization: Changing Approaches to the Problem of Female Sexuality
3. "Sterilization without Unsexing": Eugenics and the Politics of Reproduction
4. A New Deal for the Child: Ann Cooper Hewitt and Sterilization in the 1930s
5. "Marriage Is Not Complete without Children": Positive Eugenics, 1930-1960
Epilogue: Building a Better Family
Notes
Selected Bibliography
Index