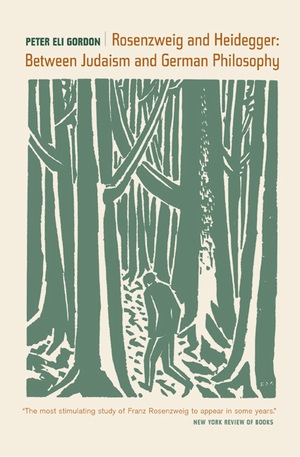 Rosenzweig and Heidegger Between Judaism and German Philosophy

Franz Rosenzweig (1886-1929) is widely regarded today as one of the most original and intellectually challenging figures within the so-called renaissance of German-Jewish thought in the Weimar period. The architect of a unique kind of existential theology, and an important influence upon such philosophers as Walter Benjamin, Martin Buber, Leo Strauss, and Emmanuel Levinas, Rosenzweig is remembered chiefly as a "Jewish thinker," often to the neglect of his broader philosophical concerns. Cutting across the artificial divide that the traumatic memory of National Socialism has drawn between German and Jewish philosophy, this book seeks to restore Rosenzweig's thought to the German philosophical horizon in which it first took shape. It is the first English-language study to explore Rosenzweig's enduring debt to Hegel's political theory, neo-Kantianism, and life-philosophy; the book also provides a new, systematic reading of Rosenzweig's major work, The Star of Redemption.

Most of all, the book sets out to explore a surprising but deep affinity between Rosenzweig’s thought and that of his contemporary, the German philosopher Martin Heidegger. Resisting both apologetics and condemnation, Gordon suggests that Heidegger’s engagement with Nazism should not obscure the profound and intellectually compelling bond in the once-shared tradition of modern German and Jewish thought. A remarkably lucid discussion of two notably difficult thinkers, this book represents an eloquent attempt to bridge the forced distinction between modern Jewish thought and the history of modern German philosophy—and to show that such a distinction cannot be sustained without doing violence to both.

"With brilliance and considerable daring, Peter Gordon's Rosenzweig and Heidegger broaches the possibility of a shared horizon and a promising dialogue between these two seminal figures—these antipodes—of twentieth-century thought. It will be the bench mark for future work in the field."—Thomas Sheehan, author of Heidegger: The Man and the Thinker

"In this brilliant book, Peter Gordon sheds light on Rosenzweig's most important philosophical book, The Star of Redemption, by means of an unexpected (and sure to be controversial) comparison—with the philosophy of Heidegger's Being and Time. The result is a "must read" for anyone with a serious interest in either thinker."—Hilary Putnam, author of The Collapse of the Fact/Value Dichotomy and Other Essays

"A major work. Gordon persuasively argues that the true originality of Rosenzweig's achievement, heretofore associated with a distinctively "Jewish" break with his German philosophical milieu, only becomes intelligible from within that very milieu. Focusing on resemblances between Rosenzweig's and Heidegger's projects, Gordon discerns the contours of a post-Nietzschean religious sensibility condensed into the paradox of a "redemption-in-the-world." This book will be valued by readers of both Heidegger and Rosenzweig, and by anyone interested in the intersections of philosophy and religion."—Eric L. Santner, author of On the Psychotheology of Everyday Life: Reflections on Freud and Rosenzweig


"A comparative reading of Rosenzweig's Star of Redemption and Heidegger's Being and Time. Peter Eli Gordon has written a work of exemplary erudition, analytical nuance, philosophical acumen and expository grace."—Paul Mendes-Flohr, author of German Jews: A Dual Identity
Read More >

Introduction: Germans, Jews, and the Transformation of Weimar Philosophy
1. Toward Metaphysics: Cohen's Opus Postumum and the Origins of the New Thinking
2. Hegel's Fate: The Emergence of Finitude in Rosenzweig's Hegel and the State
3. Beyond Metaphysics: Rosenzweig's Star (Part I)
4. Redemption-in-the-World: Rosenzweig's Star (Part II)
5. "Facing the Wooded Ridge": The Hebrew Bible in the German Horizon
6. "An Irony in the History of Spirit": Rosenzweig, Heidegger, and the Davos Disputation
Conclusion: Germans, Jews, and the Politics of Interpretation