The Way Hollywood Tells It Story and Style in Modern Movies

Hollywood moviemaking is one of the constants of American life, but how much has it changed since the glory days of the big studios? David Bordwell argues that the principles of visual storytelling created in the studio era are alive and well, even in today’s bloated blockbusters. American filmmakers have created a durable tradition—one that we should not be ashamed to call artistic, and one that survives in both mainstream entertainment and niche-marketed indie cinema. Bordwell traces the continuity of this tradition in a wide array of films made since 1960, from romantic comedies like Jerry Maguire and Love Actually to more imposing efforts like A Beautiful Mind. He also draws upon testimony from writers, directors, and editors who are acutely conscious of employing proven principles of plot and visual style. Within the limits of the “classical” approach, innovation can flourish. Bordwell examines how imaginative filmmakers have pushed the premises of the system in films such as JFK, Memento, and Magnolia. He discusses generational, technological, and economic factors leading to stability and change in Hollywood cinema and includes close analyses of selected shots and sequences. As it ranges across four decades, examining classics like American Graffiti and The Godfather as well as recent success like The Lord of the Rings: The Two Towers, this book provides a vivid and engaging interpretation of how Hollywood moviemakers have created a vigorous, resourceful tradition of cinematic storytelling that continues to engage audiences around the world.

David Bordwell is Jacques Ledoux Professor of Film Studies and Hilldale Professor of Humanities at the University of Wisconsin-Madison. Among his books are Figures Traced in Light: On Cinematic Staging (California, 2004), Film History: An Introduction (with Kristin Thompson, 2002), Planet Hong Kong: Popular Cinema and the Art of Entertainment (2000), and On the History of Film Style (1997).

“Careful, concise, yet bold in its sweep and imagination, this is one of the most important recent books in cinema studies. It should be embraced by everyone who loves the cinema.”—CHOICE

"This book is a delight. Reading it is more entertaining—and, of course, more instructive—than watching most of the movies it analyses."—Sight & Sound Magazine

"[Bordwell] writes with grace and clarity, making this book a desirable addition to any library, and not just that of the film student."—Times Literary Supplement

"This book is simply first-rate and exhaustive in terms of its scholarship and research, and is well-written, insightful, accessible, and engaging. Bordwell throws a wrench into the ways that Hollywood cinema since the 1960s is frequently taught and theorized, presenting a complex but clear picture that will stand as one of the most important books on American film from the 1960s to the present."—John Caldwell, Professor of Film and Television, UCLA

"In The Way Hollywood Tells It, David Bordwell treats us to an analytic account and history of the craft of modern Hollywood filmmaking which is at once concise and detailed. There is no shortage of scholarly literature on contemporary Hollywood, but none of it lives up to the standards set by Bordwell here. No one else has this range, depth, sophistication or authority. More remarkable still, Bordwell pulls this off with remarkable lightness of touch."—Murray Smith, University of Kent


"David Bordwell is our best writer on the cinema. He is deeply informed about films, he loves them, and he writes about them with a clarity and perception that makes the prose itself a joy to read. Because he sees movies so freshly and deeply he isn't deceived by the usual categories and finds excellence and experiment in unexpected places. For him it's no simple matter of the mainstream vs. the indies. By showing, often in shot-by-shot detail, how films communicate through style as much as subject and story, his book is liberating, allowing us to see precisely what films are doing, and why. I find David Bordwell's book to be simply astonishing."—Roger Ebert

"David Bordwell applies the descriptive techniques he's brought to the study of Ozu and Dreyer to recent American narrative cinema with his usual passionate rigor. The resulting study is clear-eyed and comprehensive, easily the best book on the subject so far. Bordwell is particularly insightful about how new technologies serve both to enhance AND limit the expressive range of current movie story-telling."—Larry Gross

"Alternatingly analytical and informative, but always entertaining, David Bordwell's The Way Hollywood Tells It makes sense of the art and business of recent American cinema like nothing else out there. This book should be required reading for all of us!"—Mark Johnson

"There is nobody writing about film with the wisdom and insight of David Bordwell. His work makes me feel as though the creative process I know and live through writing and shooting films is being thoughtfully examined and put in a context. I recognize my journeys in his work and I learn about many other ways to journey as well. Bordwell shares and unfolds the meaningful linguistic/craft/syntactical choices all filmmakers make, from all cultures, choices besides the mere political, literary, symbolic and sexual which have been so saturated with attention. He finds the meaning in movies, instead of putting it there."—James Mangold, director of Walk the Line

Acknowledgments
Introduction: Beyond the Blockbuster

part i: a real story
1. Continuing Tradition, by Any Means Necessary
2. Pushing the Premises
3. Subjective Stories and Network Narratives
4. A Certain Amount of Plot:
Tentpoles, Locomotives, Blockbusters,
Megapictures, and the Action Movie 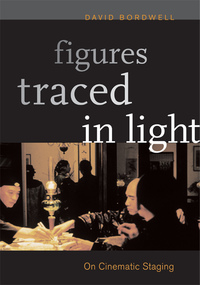