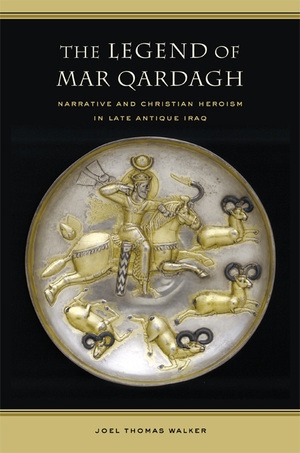 This pioneering study uses an early seventh-century Christian martyr legend to elucidate the culture and society of late antique Iraq. Translated from Syriac into English here for the first time, the legend of Mar Qardagh introduces a hero of epic proportions whose characteristics confound simple classification. During the several stages of his career, Mar Qardagh hunts like a Persian King, argues like a Greek philosopher, and renounces his Zoroastrian family to live with monks high in the mountains of Iraqi Kurdistan. Drawing on both literary and artistic sources, Joel Walker explores the convergence of these diverse themes in the Christian culture of the Sasanian Empire (224-642). Taking the Qardagh legend as its foundation, his study guides readers through the rich and complex world of late antique Iraq.

Joel Thomas Walker teaches in the Department of History at the University of Washington in Seattle.

"The Legend of Mar Qardagh is a richly textured narrative, and one that opens up vast spaces barely considered in much of western scholarship."—Susan Ashbrook Harvey, author of Scenting Salvation: Ancient Christianity and the Olfactory Imagination

Acknowledgments
List of Abbreviations
Transliteration and Terminology
Introduction: Christianity in Late Antique Iraq and the Legend of Mar Qardagh
Maps

PART I. THE HISTORY OF MAR QARDAGH IN ENGLISH TRANSLATION, WITH COMMENTARY
Introduction to the Text
The History of the Heroic Deeds of Mar Qardagh the Victorious Martyr
Index of Scriptural Citations

PART II. NARRATIVE AND CHRISTIAN HEROISM IN LATE ANTIQUE IRAQ
1. The Church of the East and the Hagiography of the Persian Martyrs
2. “We Rejoice in Your Heroic Deeds!” Christian Heroism and Sasanian Epic Tradition
3. Refuting the Eternity of the Stars: Philosophy between Byzantium and Late Antique Iraq
4. Conversion and the Family in the Acts of the Persian Martyrs
5. Remembering Mar Qardagh: The Origins and Evolution of an East-Syrian Martyr Cult

Epilogue: The Festival of Mar Qardagh at Melqi
Appendix. The Qardagh Legend and the Chronicle of Arbela
Select Bibliography
Index
Illustrations follow page