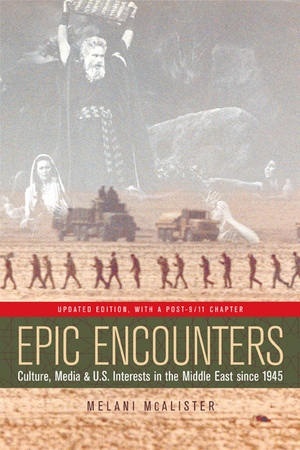 Epic Encounters Culture, Media, and U.S. Interests in the Middle East since1945, Updated Edition, with a Post-9/11 Chapter

Epic Encounters examines how popular culture has shaped the ways Americans define their "interests" in the Middle East. In this innovative book—now brought up-to-date to include 9/11 and the Iraq war—Melani McAlister argues that U.S. foreign policy, while grounded in material and military realities, is also developed in a cultural context. American understandings of the region are framed by narratives that draw on religious belief, news media accounts, and popular culture. This remarkable and pathbreaking book skillfully weaves lively and accessible readings of film, media, and music with a rigorous analysis of U.S. foreign policy, race politics, and religious history.

The new chapter, titled "9/11 and After: Snapshots on the Road to Empire," considers and brilliantly analyzes five images that have become iconic: (1) New York City firemen raising the American flag out of the rubble of the World Trade Center, (2) the televised image of Osama bin-Laden, (3) Afghani women in burqas, (4) the statue of Saddam Hussein being toppled in Baghdad, and (5) the hooded and wired prisoner in Abu Ghraib. McAlister's singular achievement is to illuminate the contexts of these five images both at the time they were taken and as they relate to current events, an accomplishment all the more remarkable since—to paraphrase her new preface—we are today struggling to look backward at something that is still rushing ahead.

Melani McAlister is Associate Professor of American Studies and International Affairs at The George Washington University.

"A wonderfully original and compelling study, essential for understanding the complex relations between the US and the nations and peoples of the Mideast. McAlister argues powerfully that American interests in the Mideast range far beyond the realm of foreign policy to become of paramount importance to the creation of American culture in the post World War II era. . . . A model for those interested in the interconnections of culture and foreign policy in an era of globalization. An engrossing read."—Amy Kaplan, author of The Social Construction of American Realism

"Melani McAlister has written a marvelous book that draws together a vast array of materials from the media, archives, scholarly sources, and popular culture, interpreting it through her rich knowledge of cultural studies. Scholars in many fields--American studies, sociology, religious studies, political science, media studies, among others--will want to read this lively and engaging book."—Robert Wuthnow, author of After Heaven: Spirituality in America Since the 1950s, and Creative Spirituality: The Way of the Artist

"A fascinating and completely original analysis of the relation between culture and foreign policy. . . this book casts entirely new light on US military, financial, and emotional investments in the Middle East. Conservative Christian sensibilities, television, Biblical epics, Black Power, and a host of gender-related representations--these and other factors all played a part in the shaping of American foreign policy in ways that have never before been noticed. No historian of twentieth-century American culture or politics should miss this brilliant book!"—Gail Bederman, author of Manliness and Civilization: A Cultural History of Gender and Race in the US, 1880-1917


"Diplomatic historians are now turning to Edward Said’s Orientalism to explore the cultural dimensions of 20th Century America’s representations of the Middle East. They are too late! Melani McAlister develops a "post-orientalist" approach to U.S. culture, foreign policy, and identity. Hers is also the first book ever to recognize that African -Americans matter to such a project. Epic Encounters is a blockbuster of a book."—Robert Vitalis, author of When Capitalists Collide: Business Conflict and the End of Empire in Egypt
Read More >

Conclusion: 9/11 and After: Snapshots on the Road to Empire
Acknowledgments
Notes
Bibliography
Filmography
Index