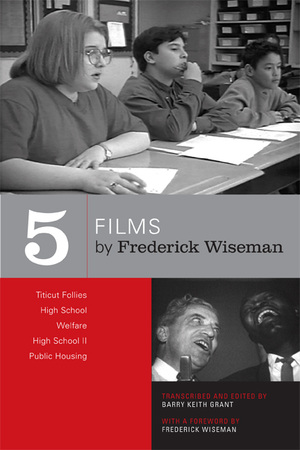 Frederick Wiseman is among America’s foremost documentary filmmakers. The recipient of many awards, including three Emmys, Wiseman has made more than thirty feature-length documentaries during a career that has spanned five decades. Together, these films provide a fascinating chronicle of American social and institutional life. This book makes available for the first time transcriptions of five of Wiseman’s most important films— Titicut Follies, High School, Welfare, High School II, Public Housing—providing all of the dialogue as well as annotations about other aspects of the soundtracks such as music and ambient noise, and notes about editing and camera movement. These scene-by-scene transcripts enable readers to scrutinize the films’ complex structural patterns, recurring motifs, editing regimes, and the unscripted dialogue that makes Wiseman’s cinema a rich repository of American speech. Editor Barry Keith Grant’s critical introduction discusses the importance of sound in Wiseman’s documentaries. Liberally illustrated with images from the films, these meticulous transcriptions are accompanied by a bibliography and filmography.

Barry Keith Grant is Professor of Film Studies and Popular Culture at Brock University in Ontario, Canada. He is the author of Voyages of Discovery: The Cinema of Frederick Wiseman (1992), and the editor of Fritz Lang Interviews (2003), Film Genre Reader 3 (2003), John Ford’s Stagecoach (2002), and The Dread of Difference: Gender and the Horror Film (1996), among other books.

“a valuable resource for documentary scholars. . . . 5 Films by Frederick Wiseman also should find a home on the shelves of linguists and cultural anthropologists . . . and it will provide an aid to all those aspiring screenwriters and playwrights who want to capture the nuances of American spoken English during the years of its decline. . . . Citation would be nearly impossible without a book like this.”—Tom Powers Int'l Documentary Magazine

“This is a work of painstaking scholarship of an original sort in film studies. . . . It will be a great addition tot he study of Wiseman’s work, and a model for on-the-ground film documentation.”—Kay Armatage University Of Toronto Quarterly

"Barry Grant has created a monumental resource for the study of a monumental filmmaker. The transcripts of these five films have been meticulously constructed without compromising the vitality and energy that characterizes the films themselves. This book should be invaluable to film scholars for as long as the films of Fred Wiseman are viewed, discussed and dissected—which we now know will be a long time indeed."—Ross McElwee, Director, Sherman's March and Bright Leaves

"Fred Wiseman is the perfect example of someone who has created a great canon of films. He is not just a great documentary filmmaker, he is a great filmmaker and artist. He has created some of the wildest, most personal, and oddly expressionistic filmmaking around. His origins are not in the movies but in the theater of the absurd. I imagine his smile of pleasure when the man in Welfare compares his situation to Godot. It's not life imitating art, but a strange admixture of both where the boundary lines between the two are no longer visible. Ultimately, Wiseman has showed us that the ultimate institution is life itself, and properly speaking, we should all be institutionalized."—Errol Morris