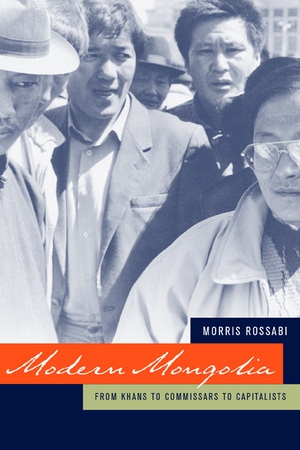 Modern Mongolia From Khans to Commissars to Capitalists

Request  an Exam or Desk Copy Recommend to Your Library (PDF) RightsLink Rights and Permissions Read an Excerpt
Chapter 1 MONGOLIA: A PEACEFUL TRANSITION

The December 10, 1989, Mongolian celebrations of International Human Rights Day did not proceed as planned. The authoritarian communist government that had ruled Mongolia since 1921 had in the past orchestrated numerous demonstrations, as well as so-called spontaneous mass movements, to commemorate important events or personalities in its history or launch new policies or programs. Military pageants, lengthy speeches by leaders of the Mongolian People’s Revolutionary Party (MPRP), the only legal political party, and snippets of patriotic and communist songs and folk dances, performed by resplendently costumed professionals, characterized these ceremonies, as did the ever-present security guards, who kept close tabs on the crowds. Competitions in the three traditional Mongolian sports of archery, wrestling, and horse-racing highlighted highlighted the Naadam festival.1 The rulers of the Mongolian People’s Republic (MPR), the name of the country since 1924, had had abundant experience in managing such spectacles, but they would be unable to manage the events of December 10, 1989.

Like their counterparts in the USSR and the People’s Republic of China, Mongolian government officials and MPRP leaders had access to an ideal public space for some of these celebrations. The Soviet Union had Red Square in Moscow, the PRC had Tiananmen Square in Beijing, and Mongolia had Sükhbaatar Square in Ulaanbaatar, named for Sükhbaatar, who in July 1921 proclaimed the country’s independence from China, confirming the victory of communism in the country. Like the main squares in Moscow and Beijing, Sükhbaatar Square is in the center of the capital. A large statue of Sükhbaatar on his horse is one of the two principal features of the square, which is otherwise mainly vacant. Government House, where the Khural, or parliament, meets and in which government and MPRP leaders have offices, is situated behind the second structure, a mausoleum in which repose the remains of Sükhbaatar and his successor, Choibalsan, often referred to as Mongolia’s Stalin. Government House overlooks the square, permitting officials to observe and hear public events. Other buildings around the square include the Palace of Culture, which houses the National Modern Art Gallery, and the State Opera and Ballet Theater.

The scene observers in Government House witnessed on December 10, 1989, both surprised and shocked them. As snow drifted down gently, two hundred people marched around with banners and signs calling for the elimination of “bureaucratic oppression” as well as a promise to implement perestroika (in Mongolian, uurchlun baiguulalt, or “restructuring of the economy”) and glasnost (il tod, or “openness and greater freedom of expression”). The demonstrators were mostly young, well-dressed, polite, and in no way obstreperous, but officials in Government House surely heard them articulate their demands, as the rock band Khonkh (“Bell”) provided musical accompaniment.2 Neither the government nor its security guards made any moves to disperse the small crowd, but officials must have been relieved when the demonstrators left the square.

They were concerned about the makeup of the crowd, which included some of their own well-educated and sophisticated adult children. The ensuing conflict could be interpreted as an intergenerational struggle for power. Most of the officials were in their fifties and sixties, and most of the demonstrators were in their twenties or early thirties. Many of these scions of privileged families had received their educations in the USSR or Eastern Europe and had been exposed to the new ideas swirling around in the freer Soviet era of the 1980s. All knew one or another of the Slavic languages, and several were comfortable in English and German, offering them exposure to Western newspapers, radio, and television.

Born in 1962 to an elite family, Sanjaasürengiin Zorig, later known as the “Golden Magpie of Democracy” and commonly accepted as the leader of the democratic movement, was in many ways typical of this group. His father was a Buryat—that is, from a minority Mongolian group—and his mother, a physician, was half-Russian and half-Mongo-lian. His paternal grandfather, a distinguished Russian scientist and explorer, had died in a Siberian prison camp. His maternal grandfather, a Buryat herdsman, had met the same fate as many Buryats in his generation: owing probably to a directive from the USSR, the Mongolian government had executed him.3 Although Zorig had received his elementary and secondary education in Mongolia, he had attended Moscow State University, graduating in 1985 with degrees in philosophy and the social sciences. Moscow State University introduced him to the excitement of student groups calling for an end to communist repression.4

Returning to Mongolia, Zorig found few reverberations of the concept of political diversity, which was gaining ground in the USSR. By 1986, he had become a lecturer in the Faculty of Social Sciences at the Mongolian National University and had started to broach the new ideas with students and faculty. Shortly thereafter, he began to meet with like-minded young people, some of whom had also studied in the USSR, to discuss political reforms and the elimination of the oppressive communist bureaucracy. In 1988, he organized a so-called New Generation group that often met in his apartment and also secretly pasted placards in Ulaanbaatar challenging the autocratic government. Recognized as “one of the promising young theoreticians in his field” and “very educated” compared to others in the group, Zorig won the respect of his contemporaries, in part because he espoused nonviolence.5

Zorig’s younger sister Sanjaasürengiin Oyun, who attended many of these meetings, modestly says that she was “in the background... taking care of all the housework . . . in the apartment...and cooking for Zorig’s friends.” However, her fluency in English meant that she was invaluable in translating declarations and, later, in interpreting for foreign journalists who wished to interview her brother. She had her first taste of politics in 1989–90, although she maintains that she was “not in the forefront of events.” After receiving bachelor’s and master’s degrees in geochemistry from Karlova University in Prague, she had spent two years as a field geologist in Mongolia. Called to the capital by her family after the December 10 demonstration, she loyally stayed on for almost a year to help her brother. But she was determined to return to her first love, geology, and she would do so. 6

Zorig was one of the planners of the demonstration on December 10, and his scholarly appearance and gentle demeanor had quieted the crowd, which heard three speakers—the journalists Tsakhiagiin Elbegdorj and Sükhbaatariin Amarsanaa and the scientist Erdenii Bat-Uul—announce the formation of a democratic movement.

Hashbat Hulan keenly observed the December demonstrations. A member of a prominent family (of the Khalkha Mongolians, the dominant group in the country, constituting about 85 percent of the population), she was perhaps even more cosmopolitan than Zorig, if only because she was fluent in English. The oldest of three daughters of a career diplomat, she had as a child lived in Yugoslavia, where her father was ambassador, and in the USSR, where he had also been stationed. In 1964, when she was three years old, her father had been selected to study at Leeds University and was thus among the first Mongolian students at a Western academic institution. However, she had studied in the USSR, graduating from the Institute of International Relations in Moscow. During her student days at the institute in the 1980s, she engaged in heated discussions and debates about the possibility of reforming the Communist Party and of progressing toward democracy. 7

This flurry of intellectual excitement and political involvement was not matched on Hulan’s 1986 return to Mongolia, her native land, but a place in which she had scarcely resided. In an interview, she expressed her dismay: “I was amazed at the ignorance and seclusion in my homeland.”8 Ulaanbaatar seemed to her a provincial town, hardly in touch with the intellectual currents sweeping across the Soviet bloc. Frustrated by what she perceived to be the backwardness of Mongolia, she took a job at the Mongolian Academy of Sciences, where she translated works from English into Mongolian and vice versa, edited publications, and compiled bibliographies. After two years, she took a job at the Oriental Institute to study and analyze trends toward regional cooperation in East Asia.9 Simultaneously, she came across proponents of democratic reform, a number of whom had studied in the USSR or Eastern Europe. By September 1989, she had begun to attend clandestine meetings, whose members hoped to initiate the transformation of Mongolia. On December 10, she and her sister Min-jin hurried to Sükhbaatar Square, only minutes away from their offices, where they heard sp

Land-locked between its giant neighbors, Russia and China, Mongolia was the first Asian country to adopt communism and the first to abandon it. When the Soviet Union collapsed in the early 1990s, Mongolia turned to international financial agencies—including the International Monetary Fund, the World Bank, and the Asian Development Bank—for help in compensating for the economic changes caused by disruptions in the communist world. Modern Mongolia is the best-informed and most thorough account to date of the political economy of Mongolia during the past decade. In it, Morris Rossabi explores the effects of the withdrawal of Soviet assistance, the role of international financial agencies in supporting a pure market economy, and the ways that new policies have led to greater political freedom but also to unemployment, poverty, increasingly inequitable distribution of income, and deterioration in the education, health, and well-being of Mongolian society.

Rossabi demonstrates that the agencies providing grants and loans insisted on Mongolia's adherence to a set of policies that did not generally take into account the country's unique heritage and society. Though the sale of state assets, minimalist government, liberalization of trade and prices, a balanced budget, and austerity were supposed to yield marked economic growth, Mongolia—the world's fifth-largest per capita recipient of foreign aid—did not recover as expected. As he details this painful transition from a collective to a capitalist economy, Rossabi also analyzes the cultural effects of the sudden opening of Mongolia to democracy. He looks at the broader implications of Mongolia's international situation and considers its future, particularly in relation to China.

Morris Rossabi is Professor of History at the City University of New York and Adjunct Professor of East and Inner Asian History at Columbia University. Among his books are Governing China's Multiethnic Frontiers (2004), Bounty from the Sheep (2000), Voyager from Xanadu (1992), Khubilai Khan: His Life and Times (California, 1988), and China among Equals (California, 1983).

Preface
List of Abbreviations and Acronyms
Prominent Mongolians in the Narrative
Map of Mongolia
1. Mongolia: A Peaceful Transition
2. From Russian to Western Influence
3. Pressure for a Market Economy, 1990-1997
4. Political and Economic Dislocations, 1997-2004
5. Herders and the New Economy
6. Poverty and Other Social Problems
7. Culture and the Market Economy
8. A New Mongolia in a New World
9. Sino-Mongolian Relations
Afterword
Notes
Select Bibliography
Index 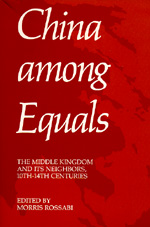 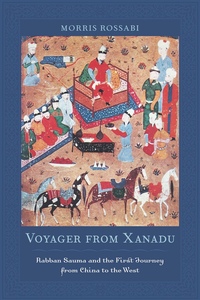 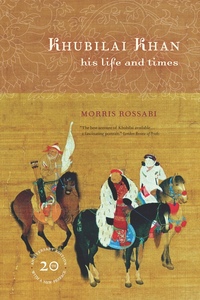