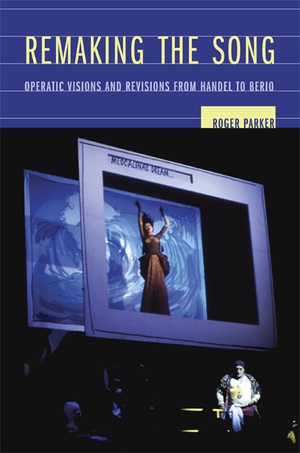 Remaking the Song Operatic Visions and Revisions from Handel to Berio

Opera performances are often radically inventive. Composers’ revisions, singers’ improvisations, and stage directors’ re-imaginings continually challenge our visions of canonical works. But do they go far enough? This elegantly written, beautifully concise book, spanning almost the entire history of opera, reexamines attitudes toward some of our best-loved musical works. It looks at opera's history of multiple visions and revisions and asks a simple question: what exactly is opera? Remaking the Song, rich in imaginative answers, considers works by Handel, Mozart, Donizetti, Verdi, Wagner, Puccini, and Berio in order to challenge what many regard as sacroscant: the opera’s musical text. Scholarly tradition favors the idea of great operatic texts permanently inscribed in the canon. Roger Parker, considering examples ranging from Cecilia Bartoli's much-criticized insistence on using Mozart's alternative arias in the Marriage of Figaro to Luciano Berio's new ending to Puccini's unfinished Turandot, argues that opera is an inherently mutable form, and that all of us—performers, listeners, scholars—should celebrate operatic revisions as a way of opening works to contemporary needs and new pleasures.

Roger Parker, Professor of Music at the University of Cambridge, is author of Leonora's Last Act: Essays in Verdian Discourse and editor of The Oxford Illustrated History of Opera.

“[Written by] one of the liveliest minds in the field of Italian opera.”—Opera

"Parker is an outstanding figure in the world of Italian opera, and here the meticulous analysis and excellence of the prose make for a brilliant book with truly radical implications. Remaking the Song represents a scholarly gold-standard."—Carolyn Abbate, author of In Search of Opera