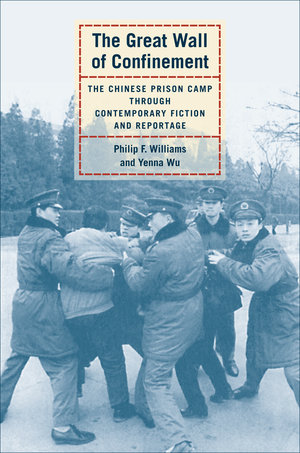 China is the only major world power to have entered the twenty-first century with a thriving prison camp network—a frightening, mostly hidden realm known since 1951 as the laogai system. This book, the most comprehensive study of China's prison camps to date, draws from a wide range of primary sources, including many compelling literary documents, to illuminate life inside China's prison camps. Focusing mainly on the second half of the twentieth century, Philip F. Williams and Yenna Wu outline the evolution of the laogai system, construct a vivid picture of prisoners' lives from arrest and interrogation to release, and provide a troubling new perspective on the human rights issues plaguing China.

Philip F. Williams is Professor and Head, School of Language Studies, Massey University, New Zealand. His previous books include Village Echoes: The Fiction of Wu Zuxiang (1993). Yenna Wu is Professor of Chinese and Director of the Asian Languages and Civilizations Program at the University of California at Riverside and author of The Chinese Virago: A Literary Theme (1995), Ameliorative Satire (1999), among other books.

“Four chapters offer a sweeping history of the Chinese prison system, with an emphasiss on contemporary China . . . . The final chapter examines fiction and nonfiction works by prisoners and civilians who condemn the system and its subcultre. . . . Recommended [for] all levels and libraries.”—H.T. Wong Choice

“In the most comprehensive treatment of the historical, cultural, and social background and development of the Chinese prison camp system, Williams and Wu explain how and why China’s leaders have continued to use labor and thought reform camps to control the population. . . . The book is a compendium of information on virtually every aspect of the prison camp system as it has been and as it is today. It is likely to be taken as the authoritative work on the subject for a long time to come. . . . Williams and Wu provide a very accessible and in-depth look into the hidden world of China’s prison camps. . . . The work will surely prove a fascinating read for anyone interested in contemporary Chinese political and social life.”—Richard Pearce Journal Of Asian & African Stds

“An analytical, state-of-the field portrayal . . . . The Great Wall of Confinement is one of those books whose objectifying, academic approach never detracts from the certainty that they raise fundamental questions of morality . . . . The Great Wall of Confinement is a vindication of the documentary value of literature, as one of the powers of writing.”—Maghiel Van Crevel Mclc Resource Center Publication

“A well-written and sensitive look at China’s prison camps as seen through Chinese writings.”—Harold M. Tanner The China Journal

“The Great Wall of Confinement is a welcome addition to the small number of studies on the laogai as the prison system is known in Chinese. . . . Wisely departing from studies that rely on interviews with camp survivors or official statistics, the authors succeed in giving a human dimension to the laogai by making critical use of a genre that has thrived since the death of Mao, namely prison literature. . . . The Great Wall of Confinement’s strength is the skillful use of testimonial texts, seen as approximate imitations of lived experiences rather than unproblematic reflections of reality. . . . The value of this riveting book lies in the wealth of detail that casts light on a sinister reality that the regime and its sympathizers abroad are keen to ignore.”—Frank Dikotter Times Higher Ed Sup (Thes)

“[The authors] are careful scholars with a deft touch. . . . How the prisoners have lived and died, adapted or failed to adapt, what they have eaten and how--as in the Soviet Gulag, food has been used as a weapon--how filthy they are, how bad their medical treatment, and how some prisoners exploit and persecute others, are all well shown here."—Jonathan Mirsky Times Literary Supplement (TLS)

"China is so big and so diverse that, as in the proverbial blind man touching an elephant, contemporary descriptions that vary dramatically can all be true. Few visitors to glittering Shanghai of Shenzhen, for example, will get any impression of the gaping gray maw of the government's prison camp system that Philip Williams and Yenna Wu, basing themselves on a vast range of Chinese sources, illuminate in erudite detail. The authors look at every facet of the camps, place them within China's historical tradition, and compare them with modern analogues. Throughout, literary and autobiographical sources give the 'feel' for the deadening world of the camps."—Perry Link, author of The Uses of Literature: Life in the Socialist Chinese Literary System

"The Great Wall of Confinement deals with issues ranging from the legal grounding—or the lack of any—of the Chinese concentration camp system, to its technical implementation, its discursive manifestation, and its physical as well as psychological impact. A book like this is long overdue. With this work, Williams and Wu have made an important contribution to the fields of Chinese legal and literary studies."—David Der-wei Wang, author of The Monster That Is History

"The Great Wall of Confinement is an excellent book. It synthesizes an already significant corpus of writings on Chinese prisons and labor camps, marshals an array of literary sources as essential historical source materials, and compares the literature of Chinese incarceration with its Soviet and European counterparts. The value of this important study stems equally from its tone—a rare combination of a level-headed quality with a very fine sensitivity to the human tragedy recounted in this literature."—Jean-Luc Domenach, author of Où va la Chine? (Where does China Go?)

"The Great Wall of Confinement has attempted to lift part of the veil on China's long lasting tragedy: the use of imprisonment, torture, forced labor against its citizens, whether criminals, feeble minded or simply political opponents. The angle is new; the question is to find out how Chinese have written on this subject, whether in fiction or reportage, the way they went about telling their stories, how much they said, or withheld. Through Philip Willams and Yenna Wu's thought-provoking analysis of such writings, of the cultural origins of forced labor and imprisonment in imperial and Communist China, one comes closer to this sinister reality, which remains to this day one of the best kept secrets of our planet."—Marie Holzman, President of the Association Solidarité Chine