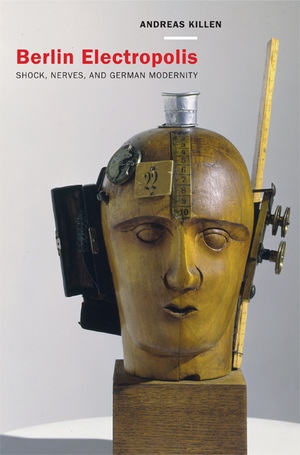 Berlin Electropolis ties the German discourse on nervousness in the late nineteenth and early twentieth centuries to Berlin's transformation into a capital of the second industrial revolution. Focusing on three key groups—railway personnel, soldiers, and telephone operators—Andreas Killen traces the emergence in the 1880s and then later decline of the belief that modernity caused nervous illness. During this period, Killen explains, Berlin became arguably the most advanced metropolis in Europe. A host of changes, many associated with breakthroughs in technologies of transportation, communication, and leisure, combined to radically alter the shape and tempo of everyday life in Berlin. The resulting consciousness of accelerated social change and the shocks and afflictions that accompanied it found their consummate expression in the discourse about nervousness.

Wonderfully researched and clearly written, this book offers a wealth of new insights into the nature of the modern metropolis, the psychological aftermath of World War I, and the operations of the German welfare state. Killen also explores cultural attitudes toward electricity, the evolution of psychiatric thought and practice, and the status of women workers in Germany's rapidly industrializing economy. Ultimately, he argues that the backlash against the welfare state that occurred during the late Weimar Republic brought about the final decoupling of modernity and nervous illness.

Andreas Killen is Assistant Professor of History at City College of New
York, CUNY, and is the author of 1973: A Cultural History (2005).

"Berlin Electropolis is the first English-language history of neurasthenia or of nerves in the German context. However, the author does more than just narrate the history of this central, yet puzzling malady; he discusses the construction, maintenance, and ultimate unraveling of a cultural assumption, by which modernity and progress were seen as creating nervous pathology. Killen introduces readers to a great deal of fascinating material and forges new connections between science, culture and society."—Paul Lerner, author of Hysterical Men: War, Psychiatry, and the Politics of Trauma in Germany, 1890-1930