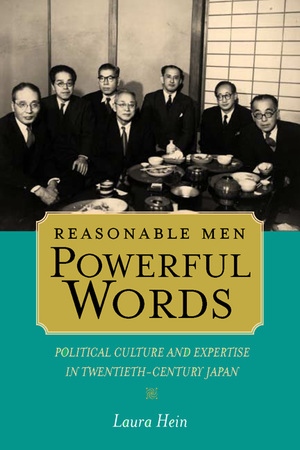 Reasonable Men, Powerful Words traces the development of political culture in twentieth-century Japan through a social and intellectual biography of six Japanese economists who influenced national political life in significant ways. The global ascendance of social scientists is one of the defining characteristics of modernity. They dedicated themselves to an extraordinary range of public policies, including eliminating poverty, reducing disparities of wealth, reshaping the relationship between government and citizen, building a strong economy devoid of a military component, and creating an educated and politically active populace in Japan.

Laura Hein is Associate Professor of Japanese History at Northwestern University. She is the author of Fueling Growth: Energy and Economic Policy in Postwar Japan, 1945–1960 (1990), and co-editor of Censoring History: Citizenship and Memory in Japan, Germany, and the United States (2000).

"This is a splendid book, and the research--unusually challenging in both its nature and its scope--is strong. Laura Hein introduces us to the lives and work of an influential group of mid-20th century Japanese economists and to the rise of social-science thinking in modern Japan. She conveys in vivid detail a number of developments that highlight the complex nature of the country's modernity."—John Dower, Massachusetts Institute of Technology

"Laura Hein has given us a very valuable contribution to the history of social sciences in Japan, especially the history of economics as a social science, and most of all as a demonstration of the salience of Marxism in economic thought on the left across decades from the late 1920s through the 1970s. . . . She writes invitingly and engagingly."—Andrew E. Barshay, University of California, Berkeley