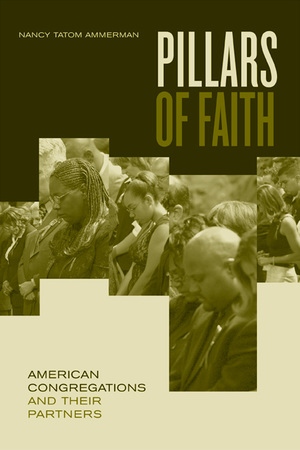 Pillars of Faith American Congregations and Their Partners

At the close of the twentieth century the United States was, by all accounts, among the most religious of modern Western nations. Pillars of Faith describes the diversity of tradition and the commonality of organizational strategy that characterize the more than 300,000 congregations in the United States, arguing that they provide the social bonds, spiritual traditions, and community connections that are vital to an increasingly diverse society.

Nancy Tatom Ammerman follows several traditions—Mainline Protestant, Conservative Protestant, African American Protestant, Catholic and Orthodox, Jewish, Sectarian, and other religions—as they establish discernible patterns of congregational life that fit their own history, tradition, and relationship to American society. Her methodologically sophisticated study balances survey research with interviews conducted with people from ninety-one different religious traditions and ethnographic observations that yield new information on many dimensions of American congregational life. Her book is the first to depict the complex resource base supporting American congregations, the enormous web of partners with whom congregations work, and the range of institutional patterns they exhibit.

Contrary to many gloomy forecasts, Pillars of Faith: American Congregations and Their Partners argues that organized religion in the United States is robust and vigorous—and that it can handle the increasing demands of escalating diversity and mobility the future is sure to bring.

Nancy Tatom Ammerman, Professor of Sociology of Religion at Boston University, is the author of Congregation and Community(1997) and Baptist Battles (1990) and co-editor of Work, Family, and Religion in Contemporary America (1995) and Studying Congregations (1998).

"This book will be a classic in the field. It does something no other book has done—it shows, with one of the most impressive sets of data I have ever seen, what congregations do and how they go about doing it."—Michael Emerson, author of Divided by Faith

"Ammerman demonstrates rare mastery in a book that is brimming with original research and original thinking. The material is well organized, and the author has an eye for the well-turned phrase. This is a book of great importance that gives us an unprecedented picture of lived American religion while challenging stereotypes and conventional wisdom."—James Wind, President of the Alban Institute, author of Finding a New Voice: The Public Role of Mainline Protestantism