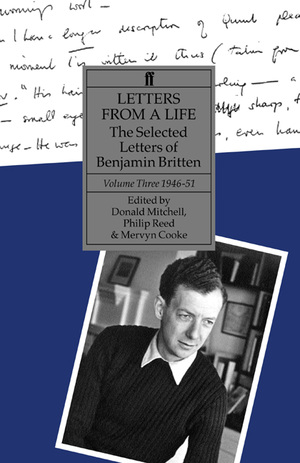 Letters From a Life The Selected Letters of Benjamin Britten, Volume Three, 1946-1951

This long-awaited third volume of composer Benjamin Britten's remarkable letters covers the years 1946–51. Fresh from the astonishing success of his great first opera, Peter Grimes, Britten was vital to the post-war rebuilding of the arts in Great Britain with his visionary work as a composer, conductor, and performer. With his partner, the celebrated tenor Peter Pears, he founded the Aldeburgh Festival, which eventually grew into the international festival that it is today, and the English Opera Group. He also toured widely in Europe and the United States as a pianist and conductor. During this time he wrote many of his best-known works, including the operas Billy Budd, Albert Herring, and The Rape of Lucretia.

Britten's correspondents include literary figures such as Christopher Isherwood, Edith Sitwell, E. M. Forster (the librettist for Billy Budd), and Edward Sackville-West, as well as musical colleagues from around the world including Ernest Ansermet, Francis Poulenc, Aaron Copland,and Igor Stravinsky.

This volume of selected letters represents one of the richest and most innovative periods of the composer's creative life. His daily concerns and the unique era in which he lived are vividly evoked by the comprehensive and scholarly annotations, which offer a wide range of detailed and fascinating information. Donald Mitchell contributes a superb introduction.

The editors are three of the most distinguished and prolific Britten scholars writing today. Donald Mitchell was a close friend of the composer for many years as well as his publisher. Philip Reed is Head of Publications at English National Opera. Mervyn Cooke is Professor of Music at Nottingham University.

"A landmark: these letters and their extensive annotation provide a virtual biography of the most important British composer since Purcell. All those interested in music in the twentieth century must read these volumes, which also provide intriguing snapshots of the recent British past."—Peter Stansky, Stanford University

"This is the composer who turned his paranoia as homosexual and pacifist into the classic 20th-century opera, Peter Grimes. Now at last we have some really new material about that personal experience. It turns out to be even more fascinating than one could have imagined."—Philip Brett, editor of Cambridge Opera Handbook