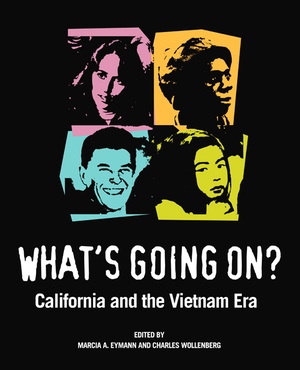 What’s Going On? California and the Vietnam Era

A turning point in twentieth-century American history, the war in Vietnam raised profound questions that affected every aspect of life in the United States. A dramatic case study of the political passions, spiritual pain, and cultural divisions produced by the war, What's Going On? California and the Vietnam Era provides for the first time a balanced and personal look at the Vietnam years in California, revealing their impact on American life and culture. Wallace Stegner believed that California "is like the rest of the United States, only more so," and in this book we discover the truth behind that sentiment.

Conceived in tandem with the Oakland Museum of California's innovative national touring exhibition of the same title, this absorbing collection of essays captures the essence of a unique time and place. The exhibition itself centers on events between 1965 and 1975 and examines the legacy of those years on the state today through some 500 historical artifacts—documents, news accounts, photographs, film clips, musical excerpts, and personal stories presented in multiple formats. These accompanying essays delve deeper into the themes raised by the exhibit, looking into such topics as the relationship between Cold War politics, the Vietnam War, and California's economy; social activism from the Right and the Left; the rise of the feminist, African American, Chicano, and veterans' movements; Vietnamese refugees; media images of the war; and the legacy of those years on the entire nation.

Marcia A. Eymann is Curator at the Oakland Museum of California and coeditor, with Drew Heath Johnson, of Silver & Gold: Cased Images of the California Gold Rush (1998). Charles Wollenberg is Professor of History at Vista College and author of Marinship at War: Shipbuilding and Social Change in Wartime Sausalito (1990).

“This is a terrific book: lively, inclusive, smart.” “It includes dozens of exceptional archival photographs and is printed on thick, supple paper that does the images justice.” “Thoughtful and engaging documentary committed to an old-fashioned idea: a communal project of searching in the past for the kind of truths that allow us to imagine the present and future in new ways.”—Robert O. Self Southern California Qtly

"This intriguing book provides a rich variety of perspectives on the roles played by California and Californians during the watershed era of the Vietnam War. It examines the continuing legacy of that war and is particularly valuable for the light it casts on the contributions of the Vietnamese to California and the nation."—Lou Cannon, author of Governor Reagan: His Rise to Power

1. California and the Vietnam War: Microcosm and Magnification —Charles Wollenberg
2. Next Stop—Silicon Valley: The Cold War , Vietnam, and the Making of the California Economy—Marc Jason Gilbert
3. Ronald Reagan and the Triumph of Conservatism—Jules Tygiel
4. The War at Home: California's Struggle to Stop the Vietnam War—R. Jeffrey Lustig
5. The Feminist Revolution in California—Ruth Rosen
6. Long, Hot California Summers: The Rise of Black Protest and Black Power—Clayborne Carson
7. Chicano and Chicana Experiences—George Mariscal
8. "Back in the World":Vietnam Veterans, California, and the Nation—John F. Burns
9. Memorializing Vietnam: Transfiguring the Living Pasts—Khuyen Vu Nguyen
10. Vietnam Legacy: The Role of California—Robert D. Schulzinger
11. Vietnamese Diaspora and California—Andrew Lam