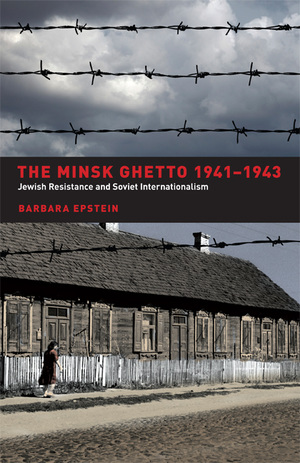 Drawing from engrossing survivors' accounts, many never before published, The Minsk Ghetto 1941-1943 recounts a heroic yet little-known chapter in Holocaust history. In vivid and moving detail, Barbara Epstein chronicles the history of a Communist-led resistance movement inside the Minsk ghetto, which, through its links to its Belarussian counterpart outside the ghetto and with help from others, enabled thousands of ghetto Jews to flee to the surrounding forests where they joined partisan units fighting the Germans. Telling a story that stands in stark contrast to what transpired across much of Eastern Europe, where Jews found few reliable allies in the face of the Nazi threat, this book captures the texture of life inside and outside the Minsk ghetto, evoking the harsh conditions, the life-threatening situations, and the friendships that helped many escape almost certain death. Epstein also explores how and why this resistance movement, unlike better known movements at places like Warsaw, Vilna, and Kovno, was able to rely on collaboration with those outside ghetto walls. She finds that an internationalist ethos fostered by two decades of Soviet rule, in addition to other factors, made this extraordinary story possible.

Barbara Epstein is Professor in the History of Consciousness Department at the University of California, Santa Cruz, and author of Political Protest and Cultural Revolution: Nonviolent Direct Action in the Seventies and Eighties (UC Press) among other books.

“Very clear and lively. . . . Epstein’s book constitutes an important contribution to the English scholarly literature on the topic, offering an interesting insight into the Jewish and Belorussian resistance movement during the Second World War.”—Natalia Krasicka European Review Of History/Revue Europeenne D'histoire

“Professor Epstein has produced a very good book with much to commend it. . . . [The Minsk Ghetto] will spur many important academic, political, and philosophical questions.”—John Patrick Farrell, CSU Fresno Canadian Journal Of History

"Provides new insights with regard to the alliance between Jews and Communism."—Kiril Feferman Studies in Contemporary Jewry

"Barbara Epstein has written a revelatory book. Arduously and carefully, she brings to light and to life an aspect of the Holocaust in Belorussia that we did not know, showing us that the victims were not only victims but also fighters. And so were a good many people who were not Jews, yet joined with them to resist Nazi brutality."—Frances Fox Piven, author of Challenging Authority: How Ordinary People Change America

"When historian Barbara Epstein traveled to Minsk to learn Yiddish, the language of her ancestors, she got more than she bargained for. An amazing, forgotten story emerged that ran against the grain of almost all accounts of the Holocaust. The Minsk Ghetto is an invaluable, and deeply moving addition to Holocaust and World War II history."—Richard Walker, author of The Country in the City: The Greening of the San Francisco Bay Area


"This richly researched, beautifully written account of one of the most important instances of inter-ethnic solidarity and resistance in face of the Holocaust packs an analytic punch as powerful as its emotional one."—Leo Panitch, author of Renewing Socialism: Democracy, Strategy and Imagination
Read More >

1. Jewish-Byelorussian Solidarity in World War II Minsk
2. Why Minsk Was Different
3. The Minsk Ghetto
4. The Ghetto Underground
5. Solidarity in Wartime Minsk
6. Going to the Partisans
7. The Soviet Betrayal of the Minsk Underground
8. Strategies of Resistance Elsewhere: The Kovno Ghetto