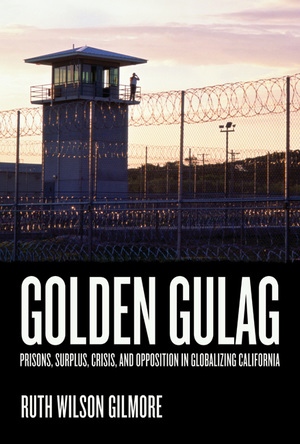 Since 1980, the number of people in U.S. prisons has increased more than 450%. Despite a crime rate that has been falling steadily for decades, California has led the way in this explosion, with what a state analyst called “the biggest prison building project in the history of the world.” Golden Gulag provides the first detailed explanation for that buildup by looking at how political and economic forces, ranging from global to local, conjoined to produce the prison boom.

In an informed and impassioned account, Ruth Wilson Gilmore examines this issue through statewide, rural, and urban perspectives to explain how the expansion developed from surpluses of finance capital, labor, land, and state capacity. Detailing crises that hit California’s economy with particular ferocity, she argues that defeats of radical struggles, weakening of labor, and shifting patterns of capital investment have been key conditions for prison growth. The results—a vast and expensive prison system, a huge number of incarcerated young people of color, and the increase in punitive justice such as the “three strikes” law—pose profound and troubling questions for the future of California, the United States, and the world. Golden Gulag provides a rich context for this complex dilemma, and at the same time challenges many cherished assumptions about who benefits and who suffers from the state’s commitment to prison expansion.

For three decades, scholar-activist Ruth Wilson Gilmore has been advocating for prison abolition. She has theorized it and practiced it. For Gilmore, prison abolition means not just the closing of prisons but, …

Ruth Wilson Gilmore is Associate Professor of Geography and Director of the Program in American Studies and Ethnicity at the University of Southern California. She is a member of the founding collective of Critical Resistance, one of the most important national anti-prison organizations in the United States.

"Golden Gulag excels at establishing the sheer number and variety of social sectors and institutions that depend upon the surpluses generated by contemporary society for their existence. Gilmore shows convincingly that those compelled to live in ghettos and who now cycle between the various stages of entrapment are fodder for a racially biased and ultimately insensitive society's highly adaptive reproduction."—Contemporary Sociology

"Gilmore makes clear that the increase in prisoner population in California was not about increasing crime but was linked to a whole series of positive and useful effects in political economy that the prison system supports- lateral effects. Golden Gulag is must reading not just for those who are involved in the critical resistance movement but for all activists."—Geographical Review

“Golden Gulag is a valuable addition to the growing literature on America's redesign as a prison-heavy nation. The data is fascinating, the analysis compelling and deeply disturbing. It deserves, and hopefully will get, a wide readership.”—American Prospect

"Gilmore traverses an impressive amount of recent history, and makes insightful connections across both time and space. She rarely seeks refuge in the safety of tentativeness, reaching instead for the bold and provocative. Her attention to dynamics rooted in political economy separates this analysis from many that chart the prison boom. That she combines this with a keen geographic sensitivity makes the text richer still."—Annals of the Association of American Geographers

“Contributes new ideas to the debate over how America has managed to reach the current levels of mass incarceration. Rooted in her home discipline of geography, Gilmore directs the criminological gaze away from the workings of the institution itself, to its situation within a particular, historical, political and geographical moment. In so doing, she forces the criminological reader to engage with complicated empirical and conceptual issues that sometimes are relegated to the edges of our analysis.”—British Journal of Criminology

“Golden Gulag offers a rigorously researched, original, and tightly-argued account of the rise of California’s Prison Industrial Complex during the 80’s and 90’s.”—Trevor Paglen, Left Turn

“As the state finally acknowledges the failure of the prison system, Gilmore’s book couldn’t be more timely—or more accurate in its assessment that California’s prisoners are our families.”—Sacramento News & Review

“An impressive first book that stands as a model of politically engaged scholarship and an indictment of California's ‘archipelago of concrete and steel cages.’ . . . In this sophisticated, interdisciplinary study, brimming with new ideas, political savvy and moral urgency, Gilmore takes us on a demanding intellectual exploration of California's economic, political, spatial and cultural history. . . . Now, if you want to understand why progressive California leads the Western world with its regressive system of punishment, Gilmore's Golden Gulag is the first must-read book of the 21st century.”—San Francisco Chronicle

“A magnificent analysis of the political economy of superincarceration and the slave plantations that California calls prisons.”—Mike Davis, author of Ecology of Fear

"Golden Gulag is a deeply necessary book for our times. Gilmore digs beneath the easy answers to the more troubling causes of a political consensus that prisons are the only solution to all urban and rural ills."—Nayan Shah, author of Contagious Divides: Epidemics and Race in San Francisco's Chinatown

"Ruth Gilmore lays bare the diabolical logic of neoliberal incarceration. She shows us that the prison is a symptom of the decline of our civilization, how the California Nightmare has produced its disposable population. Gilmore's depressingly hopeful analysis is a wake-up call for our somnolence."—Vijay Prashad, author of Keeping Up with the Dow Joneses: Debt, Prison, Workfare

Prologue: The Bus
1. Introduction
2. The California Political Economy
3. The Prison Fix
4. Crime, Croplands, and Capitalism
5. Mothers Reclaiming Our Children
6. What Is to Be Done?
Epilogue: Another Bus