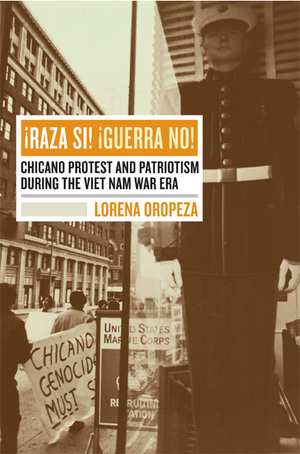 This incisive and elegantly written examination of Chicano antiwar mobilization demonstrates how the pivotal experience of activism during the Viet Nam War era played itself out among Mexican Americans. ¡Raza Sí! ¡Guerra No! presents an engaging portrait of Chicano protest and patriotism. On a deeper level, the book considers larger themes of American nationalism and citizenship and the role of minorities in the military service, themes that remain pertinent today. Lorena Oropeza's exploration of the evolution, political trajectory, and eventual implosion of the Chicano campaign against the war in Viet Nam encompasses a fascinating meditation on Mexican Americans' political and cultural orientations, loyalties, and sense of status and place in American society.

Lorena Oropeza is Associate Professor of History at the University of California, Davis.

"A fascinating and beautifully argued interpretation of how the American war in Southeast Asia affected Chicano communities. The author provides the most complete and well-documented study to date of this important chapter in U.S. history and its impact on an ethnic group with long-standing traditions of military service, assimilation, and resistance to injustice. Oropeza's book is what students of the Chicano Movement, especially the Mexican American role in antiwar activities during the Vietnam War period, have been waiting for."—George Mariscal, author of Aztlán and Viet Nam: Chicano and Chicana Experiences of the War

"¡Raza Sí! ¡Guerra No! is a superb first book. Maintaining a balance between national context and the activism in the every day, Lorena Oropeza seeks to understand and contextualize antiwar activism among a generation of Mexican American youth. Bolstered with an array of archival sources and oral interviews, she carefully delineates the nature of political organizing among Mexican Americans across the Southwest. To her credit, Oropeza avoids a narrative of solidarity as she interrogates the internal messiness and contradictions of movement politics and the result is a finely nuanced interpretation of Chicano youth rebellion, one rooted firmly in ‘the politics of confrontation.’ I highly recommend it!"—Vicki L. Ruiz, University of California, Irvine

"With this important study, Lorena Oropeza grapples with some of the central questions in the history of ethnic Mexicans in the United States. Although the central thrust of the work is an exploration of the evolution, political trajectory, and eventual implosion of the Chicano mobilization against war in Viet Nam, the study is ultimately a meditation on much larger questions involving Mexican American's political and cultural orientations, loyalties, and sense of status and place in American society. In these unsettled times, Oropeza's analysis of the relationship between war, citizenship, and masculinity should also contribute a much-needed reassessment of these important issues in contemporary American and Mexican life."—David G. Gutiérrez, author of Walls and Mirrors: Mexican Americans, Mexican Immigrants, and the Politics of Ethnicity

Introduction
1. “To Be Better and More Loyal Citizens”: A Tradition of Mexican American Activism
2. “New Wind from the Southwest”: Questioning a Political Tradition
3. “Branches of the Same Tree”: Aztlán and Viet Nam
4. “I’d Rather Have My Sons Die for La Raza . . . than in Vietnam”: The Making of a Moratorium
5. “A Common Goal”: The Chicano Moratorium March of August 1970
Epilogue