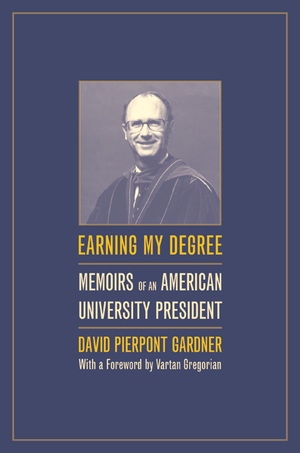 Earning My Degree Memoirs of an American University President

David Pierpont Gardner was president of one of the world's most distinguished centers of higher learning—the nine-campus University of California—from 1983 to 1992. In this remarkably candid and lively memoir he provides an insider's account of what it was like for a very private, reflective man to live an extremely public life as leader of one of the most complex and controversial institutions in the country. Earning My Degree is a portrait of uncommon leadership and courage and a chronicle of how these traits shaped a treasured, and sometimes mystifying, American institution.

Before his tenure as president, Gardner spent seven years at the University of California, Santa Barbara, during a tumultuous era of culture wars, ethnic division, and anti–Vietnam War protests, leaving his post as vice chancellor to serve as vice president of the University of California from 1971 to 1973. In 1973 he was named president of the University of Utah, and while there he chaired the National Commission on Excellence in High Education, which authored A Nation at Risk, regarded today as the twentieth century's most telling report on the condition of American public schools. As president of the University of California, he contended with intense controversies over affirmative action, animal rights, AIDS research, weapons labs, divestment in South Africa, and much more. This memoir recounts his experiences with these and other issues and describes his dealings with the diverse cast of characters who influence the university: U.S. presidents, governors, legislators, regents, chancellors, faculty, staff, students, alumni, and donors. The epilogue of Earning My Degree is a thoughtful and engaging account of the ten years since Gardner's retirement that includes his personal views about what has truly mattered in his life.

David Pierpont Gardner is a member of the National Academy of Education and the American Philosophical Society and is a Fellow of the American Academy of Arts and Sciences and the National Academy of Public Administration. He is the author of The California Oath Controversy (California, 1967) and coeditor of Higher Education and Government (1979). He served as president of the William and Flora Hewlett Foundation from 1993 to 1999 and as chairman of the Board of Trustees of the J. Paul Getty Trust from 2000 to 2004. Vartan Gregorian is President of the Carnegie Corporation of New York and former President of Brown University.

"Among the memoirs of university presidents, this is a gem. Gardner was at the center of the action in higher education from the Sputnik era to the end of the century while also contributing significantly to other important aspects of our national life. His fascinating and moving narrative is always informed by those larger socioeconomic and cultural events that together determined the contemporary shape of American higher education."—Harold T. Shapiro, President Emeritus of The University of Michigan and Princeton University

"I have known David Gardner since his days as a graduate student at Berkeley. In the intervening years, he has experienced both triumphs and tragedies and treats them with both candor and understanding. He has had good judgment, inventive solutions to complex problems, calmness in the midst of turmoil, a genius at persuasion, and courage bordering on daring. All of these attributes he applied to his leadership within and outside of the University of California. His memoir has a liveliness and a sense of reality--how it really was and how it really felt."—Clark Kerr, 12th President, University of California