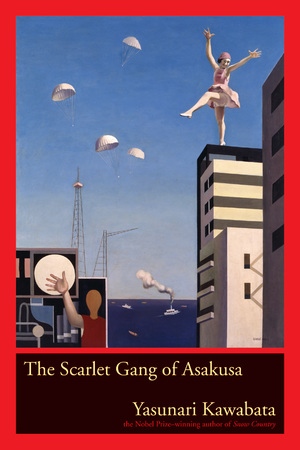 In the 1920s, Asakusa was to Tokyo what Montmartre had been to 1890s Paris and Times Square was to be to 1940s New York. Available in English for the first time, The Scarlet Gang of Asakusa, by Nobel Prize winner Yasunari Kawabata, captures the decadent allure of this entertainment district, where beggars and teenage prostitutes mixed with revue dancers and famous authors. Originally serialized in a Tokyo daily newspaper in 1929 and 1930, this vibrant novel uses unorthodox, kinetic literary techniques to reflect the raw energy of Asakusa, seen through the eyes of a wandering narrator and the cast of mostly female juvenile delinquents who show him their way of life. Markedly different from Kawabata's later work, The Scarlet Gang of Asakusa shows this important writer in a new light. The annotated edition of this little-known literary gem includes the original illustrations by Ota Saburo. The annotations illuminate Tokyo society and Japanese literature, bringing this fascinating piece of Japanese modernism at last to a wide audience.

Yasunari Kawabata (1899-1972) won the Nobel Prize for literature in 1968. His 1937 novel Snow Country secured his position as one of Japan's leading authors. Alisa Freedman is a visiting assistant professor of Japanese literature at the University of Illinois at Urbana-Champaign. Donald Richie—novelist, critic, essayist, travel writer, and former director of the Japanese cinema collection at the Museum of Modern Art in New York—is author of The Films of Akira Kurosawa.

“[An] excellent translation of what could not have been an easy text to render into English … [a] typically insightful foreword and afterword by Richie.””—Japan Times

“Nobel laureate Kawabata wrote this work in 1930, when Japanese literature was heavily influenced by European fiction's great modernists, among them Joyce, Proust, and Rilke. For 80 years it has been unavailable to Westerners because it was considered untranslatable. Finally, owing to Freedman's remarkable rendering, readers are able to walk with Kawabata through the back alleys of Tokyo's seedy Asakusa district . . . accessible and relevant.”—Library Journal

“[An] extraordinary modernist novel. . . . The use of slang and the references to popular culture of the time must have made The Scarlet Gang of Asakusa extremely difficult to translate, and Alisa Freedman has done a superb job.”—Ian Buruma New York Review Of Books

"This volume's greatest value is as an artifact: of early Kawabata and of a lost refuge of decadence. It's worth the romp."—Voice Literary Supplement (Vls)

"Freedman and Richie bring to the non-Japanese reading public the chance to read a heretofore untranslated work by Nobel-prizewinner Yasunari Kawabata, one of Japan's most famous modern authors. The Scarlet Gang of Asakusa is a revealing recreation of the rough and racy atmosphere of Tokyo called Asakusa during the late 1920s and early 30s, and it is quite different from notions of aestheticized Japan often associated with Kawabata's other work. The translator is to be commended for turning an idiosyncratic and difficult text into compelling English."—Liza Dalby, author of Geisha


"Kawabata is an important writer in world literature, best known for delicate, sometimes other-worldly novels like Snow Country. The Scarlet Gang of Asakusa shows another side of the writer, which is experimental and most definitely of this world. Nevertheless, one can see aspects of the novelist—especially his relationship to women and their (in his eyes) short-lived physical beauty—which would be developed and refined in his later work. The book also evokes aspects of urban Japan at the end of the 1920s better than anything else I have read. Donald Richie's introduction is a great asset to the book."—Theodore W. Goossen, editor of The Oxford Book of Japanese Short Stories
Read More >