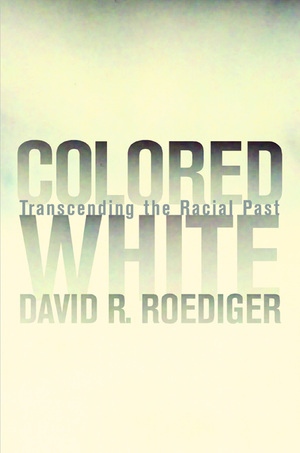 Colored White Transcending the Racial Past

David R. Roediger's powerful book argues that in its political workings, its distribution of advantages, and its unspoken assumptions, the United States is a "still white" nation. Race is decidedly not over. The critical portraits of contemporary icons that lead off the book--Rush Limbaugh, Bill Clinton, O.J. Simpson, and Rudolph Giuliani--insist that continuities in white power and white identity are best understood by placing the recent past in historical context. Roediger illuminates that history in an incisive critique of the current scholarship on whiteness and an account of race-transcending radicalism exemplified by vanguards such as W.E.B. Du Bois and John Brown. He shows that, for all of its staying power, white supremacy in the United States has always been a pursuit rather than a completed project, that divisions among whites have mattered greatly, and that "nonwhite" alternatives have profoundly challenged the status quo.

Colored White reasons that, because race is a matter of culture and politics, racial oppression will not be solved by intermarriage or demographic shifts, but rather by political struggles that transform the meaning of race--especially its links to social and economic inequality. This landmark work considers the ways that changes in immigration patterns, the labor force, popular culture, and social movements make it possible--though far from inevitable--that the United States might overcome white supremacy in the twenty-first century. Roediger's clear, lively prose and his extraordinary command of the literature make this one of the most original and generative contributions to the study of race and ethnicity in the United States in many decades.

Smear Campaign: Giuliani, The Holy Virgin Mary, and the Critical Study of Whiteness

By Dave Roediger, author of Coloured White: Transcending the Racial Past “Smear Campaign” originated in a pair of talks I gave in 2000, one at Bowling Green State University in Ohio and …

David R. Roediger is Babcock Professor of History at the University of Illinois, Urbana-Champaign. He is the author of Towards the Abolition of Whiteness: Essays on Race, Politics, & Working Class History (1994), The Wages of Whiteness: Race & the Making of the American Working Class (1991) and Our Own Time: A History of American Labor & the Working Day (1989) and editor of Black on White: Black Writers on What It Means to Be White (1998).

“Roediger’s clear, lively prose and his command of the literature make Colored White an original contribution to the study of race and ethnicity in the United States. . . . this book stands out for its lucidity, sweep and new historical investigations.”—Sirreadalot.org

"In this splendid book, David Roediger shows the need for political activism aimed at transforming the social and political meaning of race…. No other writer on whiteness can match Roediger's historical breadth and depth: his grasp of the formative role played by race in the making of the nineteenth century working class, in defining the contours of twentieth-century U.S. citizenship and social membership, and in shaping the meaning of emerging social identities and cultural practices in the twenty-first century."—George Lipsitz, author of The Possessive Investment in Whiteness

"David Roediger has been showing us all for years how whiteness is a marked and not a neutral color in the history of the United States. Colored White, with its synthetic sweep and new historical investigations, marks yet another advance. In the burgeoning literature on whiteness, this book stands out for its lucid, unjargonridden, lively prose, its groundedness, its analytic clarity, and its scope."—Michael Rogin, author of Blackface, White Noise

One: Still White
1. All about Eve, Critical White Studies, and Getting Over Whiteness
2. Smear Campaign: Giuliani, the Holy Virgin Mary, and the Critical Study of Whiteness
3. White Looks and Limbaugh’s Laugh
4. White Workers, New Democrats, and Affirmative Action
5. "Hertz, Don’t It?" White "Colorblindness" and the Mark(et)ings of O.J. Simpson (with Leola Johnson)
Two: Toward Nonwhite Histories
6. Nonwhite Radicalism: Du Bois, John Brown, and Black Resistance
7. White Slavery, Abolition, and Coalition: Languages of Race, Class, and Gender
8. The Pursuit of Whiteness: Property, Terror, and Expansion, 1790–1860
9. Inbetween Peoples: Race, Nationality, and the "New-Immigrant" Working Class (with James Barrett)
10. Plotting against Eurocentrism: The 1929 Surrealist Map of the World
Three: The Past/Presence of Nonwhiteness
11. What If Labor Were Not White and Male?
12. Mumia Time or Sweeney Time?
13. In Conclusion: Elvis, Wiggers, and Crossing Over to Nonwhiteness