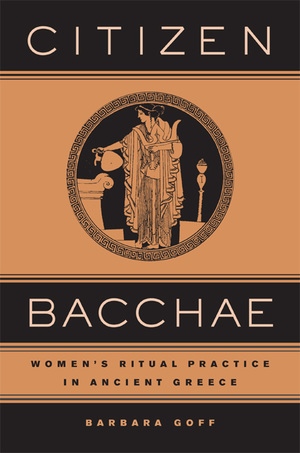 What activities did the women of ancient Greece perform in the sphere of ritual, and what were the meanings of such activities for them and their culture? By offering answers to these questions, this study aims to recover and reconstruct an important dimension of the lived experience of ancient Greek women. A comprehensive and sophisticated investigation of the ritual roles of women in ancient Greece, it draws on a wide range of evidence from across the Greek world, including literary and historical texts, inscriptions, and vase-paintings, to assemble a portrait of women as religious and cultural agents, despite the ideals of seclusion within the home and exclusion from public arenas that we know restricted their lives.

As she builds a picture of the extent and diversity of women’s ritual activity, Barbara Goff shows that they were entrusted with some of the most important processes by which the community guaranteed its welfare. She examines the ways in which women’s ritual activity addressed issues of sexuality and civic participation, showing that ritual could offer women genuinely alternative roles and identities even while it worked to produce wives and mothers who functioned well in this male-dominated society. Moving to more speculative analysis, she discusses the possibility of a women’s subculture focused on ritual and investigates the significance of ritual in women’s poetry and vase-paintings that depict women. She also includes a substantial exploration of the representation of women as ritual agents in fifth-century Athenian drama.

Barbara Goff is Lecturer in Classics at the University of Reading. She is editor of History, Tragedy, Theory: Dialogues on Athenian Drama (1995) and author of The Noose of Words: Readings of Desire, Violence, and Language in Euripides' Hippolytos (1990).

"A hugely ambitious project from which Goff has produced an immensely valuable piece of work. This may well become the standard reference concerning priesthoods, festivals, and representations of ritual action. Goff also makes an outstanding contribution to gender studies in the ancient world. Citizen Bacchae avoids simplistic and politicized discourse in favor of an elegant dialectic of argument that takes many different views into consideration and negotiates a sophisticated and convincing path between them."—Froma Zeitlin, author of Playing the Other: Gender and Society in Classical Greek Literature

Introduction
1. Working Toward a Material Presence
2. Ritual Management of Desire: The Reproduction of Sexuality
3. In and Out of the City: Imaginary Citizens
4. Representing Women: Ritual as a Cultural Resource
5. Women Represented: Ritual in Drama