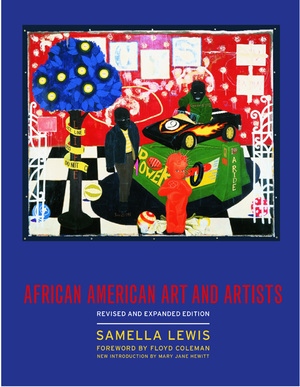 Few can bring to African American art history experience, knowledge, and perspective equal to those of Samella Lewis. She has been in close and sensitive contact with African American artists for over fifty years—first at Dillard University as a student of the internationally renowned sculptor and printmaker Elizabeth Catlett in the early 1940s, and later, along with fellow student John Biggers, at Hampton Institute (now University) under the tutelage of Viktor Lowenfeld, Lewis produced accomplished works that have a profoundly phenomenal presence. As an art historian with specialties in Asian art, particularly Chinese and Japanese art, Lewis is able to present cross-cultural perspectives with aplomb. As a professor of art at historically black colleges such as Florida A. & M. University and Morgan State University and at majority institutions such as Ohio State University and Scripps College of the Claremont Colleges, Lewis has an unusual grasp of the educational needs of today's college students. She is very much at home in the museum world, having served as coordinator of education at the Los Angeles County Museum and later as chief curator of the Museum of African American Art in Los Angeles. Lewis has also founded a number of galleries and publishing ventures, among them the highly respected journal, the International Review of African American Art.

African American Art and Artists examines the skilled craftsmen of Colonial America and the artists who used their art to further the cause of black liberation; the emergence of the professional artist and the development of the Harlem Renaissance; the unparalleled creative expressions of the 1960s and 1970s and the new voices of the 1980s and 1990s. It is a balanced and well researched art history tome that is eminently readable. It affirms through astute comparisons the importance of African traditions to the development of African American cultural expression in the United States. Thanks to Samella Lewis we gain deeper appreciation for the understanding of the richness and diversity that African American art adds to American civilization.

INTRODUCTION TO THE REVISED AND EXPANDED EDITION

African Americans are not a homogeneous group. In 1790, the year of the first national census, the term "Negro" was current, and the majority of Negroes were slaves. Emancipation, migration, miscegenation, and education diversified the population to the extent that today the African American population is as diverse as the Euro-American population. Yet with all the diversity, a common cultural framework and a social history sustain the classification.

Thus a foreword to a book entitled African American Art and Artists must confront the challenge of definition—what is African American art? Is it more African than American? Where is it exhibited? These may seem naive questions, but they are often posed by those who are new to the work and its creators, particularly young people, the majority of whom have had little art education. During lean economic times the arts are the first to be eliminated from the curricula of public schools, and rare is the private school that includes artists of color in an art appreciation class. It is obvious, then, that this text by Samella Lewis is sorely needed.

When meeting a new acquaintance involves answering the question, What do you do? and mention activities involving African American art, I often say that the art is more American than African, and that it is syncretistic—like jazz. Most people know what jazz is. They know that it is perhaps America's only indigenous art form, a fusion of African rhythms, European harmony, and, increasingly, Asian elements.

Samella Lewis spent her formative years in the Deep South. Influenced by the life experiences of W. E. B. DuBois (1868-1963), she is keenly aware of all the contradictions the African American artist must assimilate. DuBois was born and received his early education in Great Barrington, Massachusetts. His Caucasian mentor advised him to seek higher education in the South, however, in an all-African American community, where he could learn who he was and what to expect as an African American. He taught school in a poor rural community in Tennessee while he completed his studies at Fisk University in Nashville, which prepared him well for graduate studies at Harvard, where he earned his Ph.D.

Samella Lewis traveled a comparable path, from Dillard univerisyt in New Orleans to Hampton Institute, now Hampton University, in Virginia. At Hampton she had the benefit of the wisdom and experience of a refugee from Nazi-controlled Austria, Viktor Louenfeld, to guide her progress as an artist-art historian through the contradictions of segregated African American institutions that were governed by Caucasians.

She withstood the resistance to her struggle for equality in African American institutions, survived minority faculty status at schools in upstate New York and in California, placed her own aspirations as a visual artist on the back burner while she advocated for African American artists seeking to be recognized and showcased, and created curricula that included art by artists of color in California institutions, only to see them disappear after she retired. As Floyd Coleman remarks in his foreword to the 1990 edition of this book, "Few can bring to African American art history experience, knowledge, and perspective equal to those of Samella Lewis. She had been in close and sensitive contact with African American artists for over fifty years." She knows intimately the ambivalence of those artists about African American identity and the Euro-American aesthetic and the conflict it brings to the creative process.

Where can this art be seen? The museums and galleries in the United States that feature works by African American artists are not numerous, but they exist, primarily in major cities. The permanent collections of some major museums contain stellar works by African American artists. Additionally, major retrospectives of works by the masters are organized from time to time, such as Over the Line: The Art and Life of Jacob Lawrence, organized by the Phillips Collection, Washington, D.C. There is no better example of transcendence of all the ambiguity and tensions the African American artist faces than Lawrence's life and work. The editors of the exhibition catalogue explain its title as one that

is meant to be evocative and allusive, utilizing both senses of the word over and implying that Lawrence and his art occupy a transitional, undefined, or liminal place in American culture. By alluding to a border . . . through the use of the word line, the title acknowledges the artistic and social climate in which the artist spent most of his professional life—in a culture that categorized difference in binary terms and attempted to clearly delineate between the two. But it is also meant to imply that in his art and life he attempted to transcend this situation, to negate and go beyond such limitations, and to deal with the fundamental complexities of modern life. (Peter T. Nesbett and Michelle DuBois, eds., Over the Line: The Art and Life of Jacob Lawrence, published in association with the Jacob and Gwendolyn Lawrence Foundation [Seattle: University of Washington Press, 2000], 11)

Finally, the challenge to African American artists today is to find ways to use both the spiritual and material powers of art in such a way that their expressions become a vehicle for the understanding of people. This text has been written, this book created, to facilitate that process.

Samella Lewis has brought African American Art and Artists fully up to date in this revised and expanded edition. The book now looks at the works and lives of artists from the eighteenth century to the present, including new work in traditional media as well as in installation art, mixed media, and digital/computer art. Mary Jane Hewitt, an author, curator, and longtime friend of Samella Lewis's, has written an introduction to the new edition. Generously and handsomely illustrated, the book continues to reveal the rich legacy of work by African American artists, whose art is now included in the permanent collections of national and international museums as well as in major private collections.

Samella Lewis is Professor Emerita of Art History, Scripps College, and the author of The Art of Elizabeth Catlett (2000) and Caribbean Visions: Contemporary Painting and Sculpture (1995).

"Beginning with the arts produced in the Colonial period, Dr. Lewis documents and interprets the flow of creative productions of an important segment of the American population. Her book shows that the range of art produced by African American artists covers the entire spectrum of craft productions through painting, sculpture, and printmaking. There is a progressive development of style that not only reflects the trends in particular periods, but reveals an evolving pattern of indigenous qualities that are distinct. The art community in general and the African American community in particular are fortunate to have Dr. Samella Lewis, for she has developed unusual authority in the area of African American art. I know that African American Art and Artists will be of great value educationally and that it will offer a stimulating and rewarding experience to all who have the opportunity to share in its contents."—Jacob Lawrence

1619-1865: CULTURAL DEPRIVATION AND SLAVERY
The Craft Heritage as an Economic Resource
The Emergence of Professional Artists
Freemen and the Abolitionist Movement
Discrimination and the Problem of Patronage

192-1940: NEW AMERICANISM AND ETHNIC IDENTITY
The Spread of the Harlem Movement
The Self-Taught Individualists

1940-1960: SOCIAL AND POLITICAL AWARENESS
Mural Art as Cultural and Social Commentary
The WPA and Its Legacy

1990-2002: FROM PAINTING TO TECHNOLOGY: ART BEFORE AND INTO THE NEW MILLENNIUM
Painting
Sculpture
Installation Art
Mixed-Media Art
Digital/Computer Art