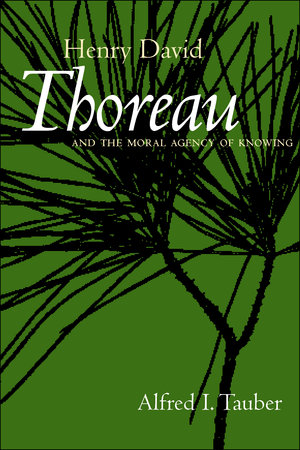 Henry David Thoreau and the Moral Agency of Knowing

In his graceful philosophical account, Alfred I. Tauber shows why Thoreau still seems so relevant today—more relevant in many respects than he seemed to his contemporaries. Although Thoreau has been skillfully and thoroughly examined as a writer, naturalist, mystic, historian, social thinker, Transcendentalist, and lifelong student, we may find in Tauber's portrait of Thoreau the moralist a characterization that binds all these aspects of his career together.

Thoreau was caught at a critical turn in the history of science, between the ebb of Romanticism and the rising tide of positivism. He responded to the challenges posed by the new ideal of objectivity not by rejecting the scientific worldview, but by humanizing it for himself. Tauber portrays Thoreau as a man whose moral vision guided his life's work. Each of Thoreau's projects reflected a self-proclaimed "metaphysical ethics," an articulated program of self-discovery and self-knowing. By writing, by combining precision with poetry in his naturalist pursuits and simplicity with mystical fervor in his daily activity, Thoreau sought to live a life of virtue—one he would characterize as marked by deliberate choice. This unique vision of human agency and responsibility will still seem fresh and contemporary to readers at the start of the twenty-first century.

Alfred I. Tauber is Professor of Philosophy, Professor of Medicine, and Director of the Center for Philosophy and History of Science at Boston University. Among his previous books are Confessions of a Medicine Man (1999) and The Immune Self: Theory or Metaphor? (1994).

"Tauber's work will amply reward persistent thumbing. It deserves praise as a novel, often stringent philosophical reading of Thoreau, one that properly places him in the forefront of ecological debate in our time."—Thoreau Society Bulletin

"Tauber is a sensible thinker who possesses the uncommon merit of recognizing which are the most interesting questions. Moreover, he has a good eye for the range of connections to various intellectual traditions, and this is stimulating, as is his effort to locate Thoreau's significance for contemporary debates. Most importantly, one of his recurring themes—Thoreau's view that human knowing as such necessarily has a moral cast--is rightly a perennial one for thoughtful human beings, and always worth reflecting upon."—Philosophy and Literature

"Tauber's book is encyclopedic—not only a revealing and comprehensive study of Thoreau but also a full vision of the Romantic Weltanschauung and its relevance to contemporary concerns in philosophy, science, and poetics. While this scope is wildly ambitious, Tauber admirably delivers, always informing his parts with the whole, consistently altering the whole with his parts."—Eric Wilson, author of Emerson's Sublime Science

"In arguing for the centrally moral and ethical value of Thoreau's works, Tauber is taking a brave stance in these slippery postmodern times…. It's one thing to praise Thoreau for his opposition to the Mexican War, his philosophy of passive resistance, and his fervent opposition to slavery. It's quite another to argue that his entire project—his whole sense of identity, self-formation, and his relation to nature—is part of a deeply moral enterprise….Thoreau's modernity has been defined in many ways in recent years. Tauber adds another important and distinctive dimension to this discussion."—H. Daniel Peck, John Guy Vassar Professor of English, Vassar College