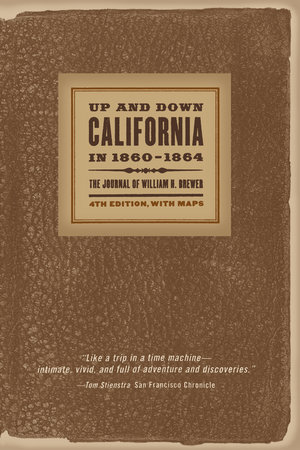 In 1860 William Brewer, a young Yale-educated teacher of the natural sciences and a recent widower, eagerly accepted an offer from Josiah Whitney to assist in the first geological survey of the state of California. Brewer was not a geologist, but his training in agriculture and botany made him an invaluable member of the team. He traveled more than fourteen thousand miles in the four years he spent in California and spent much of his leisure time writing lively, detailed letters to his brother back East.

These warmly affectionate letters, presented here in their entirety, describe the new state in all its spectacular beauty and paint a vivid picture of California in the mid-nineteenth century. This fourth edition includes a new foreword by William Bright (1500 California Place Names) and a set of maps tracing Brewer's route.

"This volume of letters, by a member of the First Geological Survey party in California which tramped 4,000 miles through the state in the 'sixties of last century, is a most attractive record. . . . The descriptions of scenery, of animal life, of Indian villages, mining camps and Mexican ranches are all extremely vivid. As a travelogue of pioneer days in California it is probably unequalled."—Geography

"A classic travelog is newly gussied up with a 2-page forward by William Bright of 1500 California Place Names fame, four maps tracing William Henry Brewer's 1860-64 route in California, and a 15-page itinerary indexing his text."—Taxon

"Students of California history who do not already own Brewer's journal, or who cannot locate a second-hand copy, will welcome its reappearance in print."—Southern California Quarterly

"By 1864 no one knew California better than Brewer. Contemporary readers can once again feel the thrill of being with him as he saw California for the first time and found a place truly commensurate with his capacity for wonder."—Kevin Starr, State Librarian of California