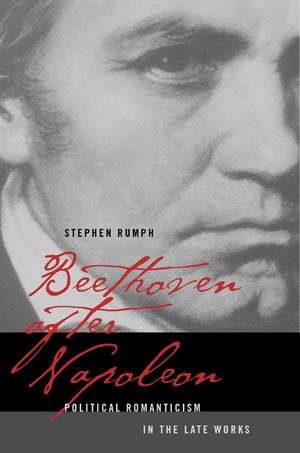 Beethoven after Napoleon Political Romanticism in the Late Works

A Kingdom Not of This World

Our kingdom is not of this world, say the musicians, for where do we find in nature, like the painter or the sculptor, the prototype of our art? Sound dwells everywhere, but the soundsñthat is, the melodiesñthat speak the higher language of the spirit kingdom reside in the human heart alone.

This passage could head all E.T.A. Hoffmann's writings on music. In story, novella, essay, and review he championed the unique status of his beloved art. Music alone, claimed Hoffmann, slipped the shackles of imitation that bound the other arts to nature, the world of the senses. Such abstraction, however, did not render music mute. The most purely spiritual art, music soared above physical reality to express a realm of metaphysical experience. As the allusion to John's gospel indicates, Hoffmann credited music with religious revelationñand the composer with a messianic calling. Hoffmann did not labor in vain. Perhaps more than any other writer he helped propagate the doctrine of "absolute music," an idea that still holds sway among critics and audiences.

Nowhere did Hoffmann more eloquently proclaim this gospel than in his review of Beethoven's Fifth Symphony. In this landmark of Beethoven reception, published in 1810 in the Allgemeine Musikalische Zeitung, Hoffmann set a new standard for musical criticism, supporting the loftiest philosophical assertions with the keenest analytical precision. His exordium hails Beethoven as the high priest of a purified instrumental music, a music that "opens to mankind an unknown kingdom, a world that has nothing in common with the outer sensory world." And yet, Hoffmann argued, let no one mistake this abstraction for undisciplined frenzy, the "product of a genius who, unconcerned with form and the selection of thoughts, gave himself over to his passion and the momentary impulses of his powers of imagination." Through a detailed analysis Hoffmann sought to show that, despite his eccentricities, Beethoven was "no less qualified, in regards to reflection [Besonnenheit], to stand beside Haydn and Mozart." The review thus purports to demonstrate the astounding claim of Kreisleriana: that music can detach itself utterly from physical reality, yet still communicate intelligibly about the spiritual realm.

A paradox lurks at the heart of Hoffmann's argument. In order to discuss music at all, he had to use language, a sign system rooted in the natural, sensory world. Hoffmann himself was acutely aware of the chasm between music and language. As he contended in "Beethovens Instrumentalmusik" (Kreisleriana), music conveyed "a higher expression than mere words, fit only for confined, earthly pleasure, can signify." He begins the symphony review by confessing that "he is overwhelmed by the object of which he should speak," and he entreats the reader not to "begrudge it him if, overstepping the bounds of common judgments, he strives to contain in words what that composition has so profoundly stirred within his soul" (p. 34). As a Romantic idealist, Hoffmann preached the total separation of music and language; as a working music critic, he had to bridge the abyss. Indeed, Hoffmann's doctrine of absolute music did not prevent him from producing an imposing bulk of literature devoted precisely to illuminating the inner nature of music. He wanted it both ways, declaring the transcendence of music while dissecting its content.

This contradiction caused a strain in Hoffmann's criticism that has not gone unnoticed. Robin Wallace pointed to a rigidity in the Fifth Symphony review, remarking

In this provocative analysis of Beethoven's late style, Stephen Rumph demonstrates how deeply political events shaped the composer's music, from his early enthusiasm for the French Revolution to his later entrenchment during the Napoleonic era. Impressive in its breadth of research as well as for its devotion to interdisciplinary work in music history, Beethoven after Napoleon challenges accepted views by illustrating the influence of German Romantic political thought in the formation of the artist's mature style. Beethoven's political views, Rumph argues, were not quite as liberal as many have assumed. While scholars agree that the works of the Napoleonic era such as the Eroica Symphony or Fidelio embody enlightened, revolutionary ideals of progress, freedom, and humanism, Beethoven's later works have attracted less political commentary. Rumph contends that the later works show clear affinities with a native German ideology that exalted history, religion, and the organic totality of state and society. He claims that as the Napoleonic Wars plunged Europe into political and economic turmoil, Beethoven's growing antipathy to the French mirrored the experience of his Romantic contemporaries. Rumph maintains that Beethoven's turn inward is no pessimistic retreat but a positive affirmation of new conservative ideals.

Stephen Rumph is Assistant Professor of Music History at the University of Washington, Seattle.

"Rumph shows at last the extent to which Beethoven's late period, the period of his most spiritual and 'inward' music, was a response to political change. In effect his book is an extended retort to E. T. A. Hoffmann's two-centuries-old claim that Beethoven's kingdom was not of this world—and it's about time! Rumph's argument will be resisted by Hoffmann's many heirs; but it is most compelling, not least because it answers so many long-standing questions about 'the music itself' and clears up so many misconceptions about the nature of musical romanticism."—Richard Taruskin, Class of 1955 Professor of Music, University of California, Berkeley