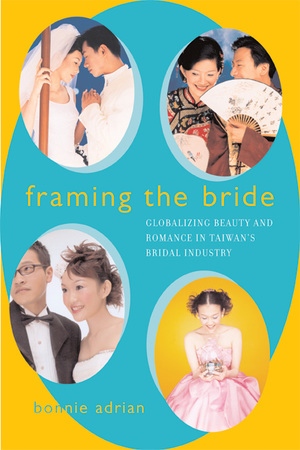 With a wedding impending, the Taiwanese bride-to-be turns to bridal photographers, makeup artists, and hair stylists to transform her image beyond recognition. They give her fairer skin, eyes like a Western baby doll, and gowns inspired by sources from Victorian England to MTV.

An absorbing consideration of contemporary bridal practices in Taiwan, Framing the Bride shows how the lavish photographs represent more than mere conspicuous consumption. They are artifacts infused with cultural meaning and emotional significance, products of the gender- and generation-based conflicts in Taiwan’s hybrid system of modern matrimony. From the bridal photographs, the book opens out into broader issues such as courtship, marriage, kinship, globalization, and the meaning of the "West" and "Western" cultural images of beauty.

Bonnie Adrian argues that in compiling enormous bridal albums full of photographs of brides and grooms in varieties of finery, posed in different places, and exuding romance, Taiwanese brides engage in a new rite of passage—one that challenges the terms of marriage set out in conventional wedding rites. In Framing the Bride, we see how this practice is also a creative response to U.S. domination of transnational visual imagery—how bridal photographers and their subjects take the project of globalization into their own hands, defining its terms for their lives even as they expose the emptiness of its images.

Bonnie Adrian is Social Sciences Core Lecturer at the University of Denver.

"Do not be misled by the title of this book. It is a study of Taiwan's bridal industry but it is also a fine ethnography of marriage in contemporary urban Taipei. With great subtlety, Bonnie Adrian shows us how much marriage in Taiwan has changed and how many of the old ways it has retained. She does so with wit and humor."—Margery Wolf, author of A Thrice-Told Tale: Feminism, Postmodernism, and Ethnographic Responsibility

"Faced with the puzzle of the ubiquitous bridal photography in Taipei, Bonnie Adrian has produced a model ethnography of media-saturated contemporary life. Ethnographically adventurous, analytically smart, and warmly human, this book cleverly unpacks the ways women’s canny choices in Taiwan are forged at the intersection of everyday worlds of inter-generational tension, fantasies fed by a keenly competitive local culture industry, and global imagery tied to the transnational beauty industry. Unlike many who work on globalization, Adrian has not lost sight of the ways that gender and family are still at the heart of people’s social worlds and women are not victims."—Lila Abu-Lughod, author of Veiled Sentiments and Writing Women’s Worlds

Introduction: Framings
1. How Can This Be? Ethnographic Contexts and History
2. Fantasy for Sale: The Modern Bridal Industry
3. Inner and Outer Worlds in Changing Taipei
4. Family Wedding Rites and Banquets
5. Making Up the Bride
6. Romance in the Photo Studio
7. Contextualizing Bridal Photos in Taiwan’s Visual Culture
8. The Context of Looking: What Taipei Viewers See
Conclusion: Reframings