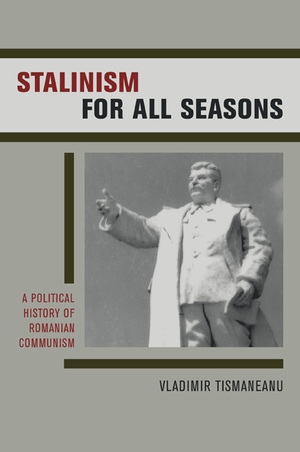 Stalinism for All Seasons A Political History of Romanian Communism

Stalinism for All Seasons is the first comprehensive history of the Romanian Communist Party (RCP). It traces the origins of the once-tiny, clandestine revolutionary organization in the 1920s through the years of national power from 1944 to 1989 to the post-1989 metamorphoses of its members. Vladimir Tismaneanu uses documents that he discovered while working in the RCP archives in Bucharest in the mid-1990s and interviews with many of the party members from the Ceau_escu and Gheorghiu-Dej eras to tell the absorbing story of how RCP members came to power as exponents of Moscow and succeeded in turning themselves into champions of autonomy. Tismaneanu analyzes both the main events in Romanian communism and the role of significant personalities in the party’s history. Situating the rise and fall of Romanian communism within the world revolutionary movement, Stalinism for All Seasons shows that the history of communism in one country can illuminate the development of communism in the twentieth century.

Tismaneanu discusses significant moments in the final six decades of world communism, including the Spanish Civil War, World War II, the Comintern, Stalin and the Bolshevization of the Eastern European communist parties, and de-Stalinization. He examines important events in international affairs during Nicolae Ceau_escu’s rule (1965-1989)—particularly Romania’s role in the Sino-Soviet conflict, the Middle East, European communism, and European security. Finally, Tismaneanu identifies the RCP’s descendants among Romania’s current political parties and personalities. Embracing a long and complex period, this book will interest readers of twentieth-century history and anyone curious about communism and postcommunism.

Vladimir Tismaneanu is Professor of Politics at the University of Maryland, College Park; Director of the university's Center for the Study of Post-Communist Societies; and editor of the journal East European Politics and Societies. He is the author of and editor of numerous books, including Reinventing Politics: Eastern Europe from Stalin to Havel and Fantasies of Salvation: Nationalism, Democracy, and Myth in Post-Communist Europe.

“A thorough account of leadership battles in the Romanian Communist party. Tismaneanu was among the first into the archives, and he uses new material...to shed light on the paradoxes of Romanian communism.”—Foreign Affairs

“Masterful...the author succeeds in formulating the most convincing explanation for the incapacity of the Romanian communist elite to ever reform its Stalinist perspective...the reader is confronted with a story in which characters are not pale bookish descriptions, but real human beings.”—Christina Petrescu Politics & Society

“Tempering specialist scholarship with sorrow and anger, Stalinism for All Seasons makes clear why it is that Romania has such difficulty becoming a normal country.”—David Pryce-Jones Times Literary Supplement (TLS)

"A penetrating and insightful ‘deconstruction’ of a highly idiosyncratic offspring of the Stalinist era."—Zbigniew Brzezinski, former National Security Advisor, and author of The Grand Chessboard

"This is the definitive work on Romanian communism, a thoroughly documented and highly readable history, starting with the underground Romanian Communist Party of the l920s and then through the creation of a Stalinist Soviet satellite state in the 1940s and finally to the post-Stalin regime of Gheorghiu-Dej and the militantly Stalinist anti-reform regime of Ceausescu and its violent demise in l989."—Robert C. Tucker, author of Stalin in Power: The Revolution from Above, 1928-1941


"This superb work of scholarship reads like a thriller. Professor Tismaneanu’s familiarity with the intricacies of the Stalinist mind, his knowledge of the shadowy players, and his access to never-before studied secret archives, make this book much more than a study of Romanian communism. This is a passionate exploration of the mechanisms of the totalitarian mind and a tragic epic of the corruption of idealism by ruthless power. The Cold War may be over, but the conflicts engagingly narrated here hold universal and timely truths."—Andrei Codrescu, NPR commentator and author of it was today: new poems

List of Illustrations
Acknowledgments
Introduction: Why a History of Romanian Communism?

Epilogue: The RCP’s Afterlife: Where Did All The Members Go? 1989–2000
Appendix: The Romanian Communist Party’s Leadership: A Biographical Roster
Notes
Select Bibliography
Index