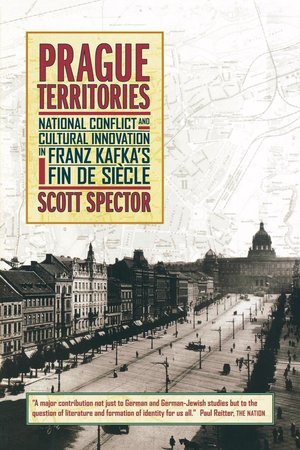 Scott Spector’s adventurous cultural history maps for the first time the "territories" carved out by German-Jewish intellectuals living in Prague at the dawn of the twentieth century. Spector explores the social, cultural, and ideological contexts in which Franz Kafka and his contemporaries flourished, revealing previously unseen relationships between politics and culture. His incisive readings of a broad array of German writers feature the work of Kafka and the so-called "Prague circle" and encompass journalism, political theory, Zionism, and translation as well as literary program and practice.

With the collapse of German-liberal cultural and political power in the late-nineteenth-century Habsburg Empire, Prague’s bourgeois Jews found themselves squeezed between a growing Czech national movement on the one hand and a racial rather than cultural conception of Germanness on the other. Displaced from the central social and cultural position they had come to occupy, the members of the "postliberal" Kafka generation were dazzlingly productive and original, far out of proportion to their numbers. Seeking a relationship between ideological crisis and cultural innovation, Spector observes the emergence of new forms of territoriality.

He identifies three fundamental areas of cultural inventiveness related to this Prague circle’s political and cultural dilemma. One was Expressionism, a revolt against all limits and boundaries, the second was a spiritual form of Zionism incorporating a novel approach to Jewish identity that seems to have been at odds with the pragmatic establishment of a Jewish state, and the third was a sort of cultural no-man’s-land in which translation and mediation took the place of "territory." Spector’s investigation of these areas shows that the intensely particular, idiosyncratic experience of German-speaking Jews in Prague allows access to much broader and more general conditions of modernity. Combining theoretical sophistication with a refreshingly original and readable style, Prague Territories illuminates some early signs of a contemporary crisis from which we have not yet emerged.

Scott Spector is Associate Professor of History and German Studies at the University of Michigan, Ann Arbor.

"This admirably lucid, impressively well researched, and theoretically sophisticated book provides both a cultural history of Prague, focusing on its German-Jewish writers, and a broader context for reading Franz Kafka. It brings out the complex ways in which a 'minor' literature has a powerful if problematic political import."—Dominick LaCapra, Cornell University

"Prague Territories is a marvelous study of the 'Prague circle' writers of the generation of the 1890s, most notably Kafka, but also Max Brod, Egon Erwin Kisch, and Franz Werfel, among others. The book uses the figure of the circle as an organizing metaphor, both for the intersecting patterns of artistic collaboration and more abstractly in the hermeneutic sense. It is beautifully written and sensitively balances the at once overwhelming and yet fraternal presence of Kafka."—Carla Hesse, University of California, Berkeley

"Organized with elegance, both conceptual and stylistic, the book combines historical and literary analysis at the cutting edges of both disciplines."—Michael P. Steinberg, Cornell University