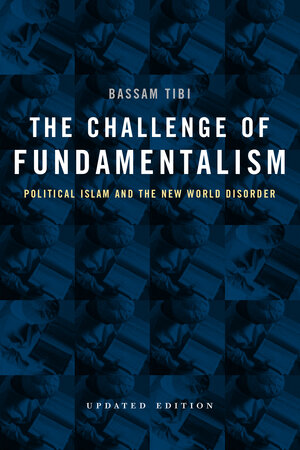 The Challenge of Fundamentalism Political Islam and the New World Disorder, Updated Edition

Long before the tragic events of September 11, 2001, Islamic fundamentalism was exerting a significant influence in nearly every corner of the world. Bassam Tibi, a widely recognized expert on Islam and Arab culture, offers an important and disquieting analysis of this particular synthesis of religion and politics. A Muslim and descendant of a famous Damascene Islamic scholar family, Tibi sees Islamic fundamentalism as the result of Islam's confrontation with modernity and not only--as it is widely believed--economic adversity. The movement is unprecedented in Islamic history and parallels the inability of Islamic nation-states to integrate into the new world secular order.

For this updated edition, Tibi has written a new preface and lengthy introduction addressing Islamic fundamentalism in light of and since September 11.

Bassam Tibi was born in Damascus and is currently Professor of International Relations at the University of Göttingen, Germany. He is the author of several books in English, including Islam between Culture and Politics (2001), Arab Nationalism (third edition, 1996), Conflict and War in the Middle East, 1967-1981 (new edition, 1997), and The Crisis of Modern Islam (1988).

1. The Context: Globalization, Fragmentation, and Disorder
2. The Study of Islamic Fundamentalism and the Scope of the Inquiry
3. World Order and the Legacy of Saddam Hussein
4. The Sociocultural Background and the Exposure to Cultural Modernity
5. Cultural Fragmentation, the Decline in Consensus, and the Diffusion of Power in World Politics
6. The Crisis of the Nation-State: Islamic, Pan-Arab, Ethnic, and Sectarian Identities in Conflict
7. The Fundamentalist Ideology: Context and the Textual Sources
8. The Idea of an Islamic State and the Call for the Implementation of the Shari'a/Divine Law
9. Democracy and Democratization in Islam: An Alternative to Fundamentalism
10. Human Rights in Islam and the West: Cross-Cultural Foundations of Shared Values