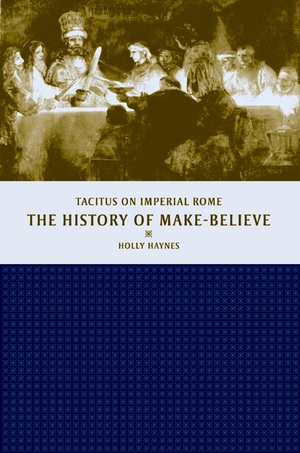 The History of Make-Believe Tacitus on Imperial Rome

A theoretically sophisticated and illuminating reading of Tacitus, especially the Histories, this work points to a new understanding of the logic of Roman rule during the early Empire.

Tacitus, in Holly Haynes’ analysis, does not write about the reality of imperial politics and culture but about the imaginary picture that imperial society makes of these concrete conditions of existence—the "making up and believing" that figure in both the subjective shaping of reality and the objective interpretation of it. Haynes traces Tacitus’s development of this fingere/credere dynamic both backward and forward from the crucial year A.D. 69. Using recent theories of ideology, especially within the Marxist and psychoanalytic traditions, she exposes the psychic logic lurking behind the actions and inaction of the protagonists of the Histories. Her work demonstrates how Tacitus offers penetrating insights into the conditions of historical knowledge and into the psychic logic of power and its vicissitudes, from Augustus through the Flavians.

By clarifying an explicit acknowledgment of the difficult relationship between res and verba, in the Histories, Haynes shows how Tacitus calls into question the possibility of objective knowing—how he may in fact be the first to allow readers to separate the objectively knowable from the objectively unknowable. Thus, Tacitus appears here as going further toward identifying the object of historical inquiry—and hence toward an "objective" rendering of history—than most historians before or since.

Holly Haynes is Assistant Professor of Classics at Dartmouth College.

"In The History of Make-Believe, Holly Haynes acutely queries the relationship of historiography, historical reality, and symbolic representations of lived historical processes. This is a serious book, informed by wide reading, and full of startlingly original insights on some of the most prominent and significant themes in Tacitus’s works. Indeed, it deserves close attention by anyone interested in the political and social strategies of high Imperial Rome."—T. Corey Brennan, author of The Praetorship in the Roman Republic

"In Tacitus the historical truth is conveyed in literary truth-telling. Instead of leaving the two separated as we do, Holly Haynes shows that Tacitus put them together in what she calls the combination ‘make-believe.’ Her book shines with originality and intelligence while opening the way to Tacitus’s canny wisdom."—Harvey Mansfield, author of Machiavelli's Virtue

Introduction: Belief and Make-Believe
1. An Anatomy of Make-Believe
Otho Bids Rome Farewell
Fingere/Credere
The Empire of the Cave
Historiography and Ideology
2. Nero: The Specter of Civil War
Galba versus Nero
The Adoption of Piso
Nero and Otho
3. Power and Simulacra: The Emperor Vitellius
The Look of the Principate
Impersonations
Simulacral Entries. . .and Exits
4. Vespasian: The Emperor Who Succeeded
Looking Backward, Moving Forward: Religio versus Superstitio
Fortuna and Fatum: The Narrative of Superstitio
The Miracle at Alexandria
5. A Civil Disturbance: The Batavian Revolts
"Us" versus "Them"
Eprius Marcellus and Petilius Cerialis on Libertas at Home and Abroad
Batavians Take Out the Roman Trash
Conclusion