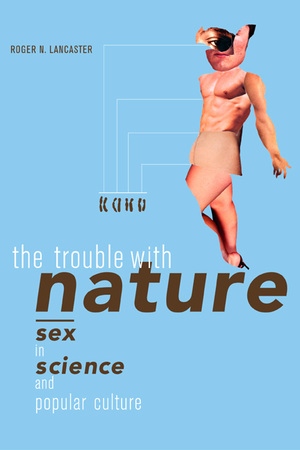 The Trouble with Nature Sex in Science and Popular Culture

Roger N. Lancaster provides the definitive rebuttal of evolutionary just-so stories about men, women, and the nature of desire in this spirited exposé of the heterosexual fables that pervade popular culture, from prime-time sitcoms to scientific theories about the so-called gay gene. Lancaster links the recent resurgence of biological explanations for gender norms, sexual desires, and human nature in general with the current pitched battles over sexual politics. Ideas about a "hardwired" and immutable human nature are circulating at a pivotal moment in human history, he argues, one in which dramatic changes in gender roles and an unprecedented normalization of lesbian and gay relationships are challenging received notions and commonly held convictions on every front.

The Trouble with Nature takes on major media sources—the New York Times, Newsweek—and widely ballyhooed scientific studies and ideas to show how journalists, scientists, and others invoke the rhetoric of science to support political positions in the absence of any real evidence. Lancaster also provides a novel and dramatic analysis of the social, historical, and political backdrop for changing discourses on "nature," including an incisive critique of the failures of queer theory to understand the social conflicts of the moment. By showing how reductivist explanations for sexual orientation lean on essentialist ideas about gender, Lancaster invites us to think more deeply and creatively about human acts and social relations.

Roger N. Lancaster teaches anthropology and cultural studies at George Mason University, where he directs the Cultural Studies Ph.D. program. He edited (with Micaela di Leonardo) The Gender/Sexuality Reader (1997) and is the author of Life Is Hard: Machismo, Danger, and the Intimacy of Power in Nicaragua (California, 1993), which won the C. Wright Mills Award and the Ruth Benedict Prize.

“A terrific critical overview of recent attempts to assert that the complexities of sex, gender and sexuality are reducible to isolatable biological features, such as genes, hormones and regions of the brain. . . . A sharp analysis of American culture's current tendency to gravitate toward the view that gender differences are genetically hard-wired. . . . [and] most effectively arms the reader with the tools we need to understand and deconstruct the fallacious science that promotes silly hetero norms.”—Lambda Book Report

“Vivid, sharp, fun-to-read . . . Includes a wide range of examples from the popular culture, carefully analyzed and exposed with witty irony.”—Leonardo

“Lancaster is a fluent, often funny, and. . . [a] good-natured writer. He divests constructivist theory and gender studies of their usual obtuse jargon and acknowledges this silliness of some ideological critiques of science.”—Wilson Quarterly

“The definitive rebuttal of evolutionary just-so stories about men, women, and the nature of desire . . . [A] spirited expose of the heterosexual fables that pervade popular culture.”—Science for the People

"Among his achievements within this text is to unpack the freight of bioreductivist strains of scientific research in the aforementioned areas and to rebut the essentializing assumptions and normalizing effects of this science and the forums in which its findings are reported. The Trouble with Nature will be of interest to social scientists and to scholars in the humanities working on issues of sex and gender, sexuality, the body, science studies, and US culture."—Culture, Health & Sexuality

"A brilliant, wide-ranging, masterful critique of the cultural impact of sociobiology and evolutionary psychology on popular as well as scholarly understandings of gender, sexuality and political economy. There are no cheap, trendy shots at science here, nor grandstand gestures to the prejudices of cultural relativists. Lancaster displays the skills of a science journalist while producing a major cultural studies opus."—Judith Stacey, author of In the Name of the Family: Rethinking Family Values in the Postmodern Age

"For several years now, the unsupported, illogical, and often wacky claims of evolutionary psychology and other offspring of sociobiology have creepingly—and creepily—achieved the status of legitimate science in this culture. Finally, in The Trouble with Nature, we have a book that brilliantly exposes the speciousness of recent—and widely accepted—arguments that gender differences, parental roles, beauty ideals, male violence, and homosexuality are genetically 'hard wired.' But Lancaster's book is not just a refutation of this 'genomania.' It's also a cultural exploration of its emergence and appeal at a time when sexuality, gender, and the family, far from exhibiting some invariant, stable form, are actually in radical flux. And it's also a wonderful read, which draws on popular culture, anthropology, philosophy, history, and scientific studies with equal ease and authority to demonstrate, not that biology plays little or no role in human life, but that cultural plasticity—not uniformity—is the real law of our evolution."—Susan Bordo, author of Unbearable Weight and The Male Body

"'What is a woman, man, homosexual or heterosexual?'—asks Roger Lancaster in this lively, engaging new book. And well may he ask as, once again, academic pop stars hawk their biodetermined creations. Eschewing simplistic caricatures, he offers vivid examples of the ambiguities, contradictions, and complexities that characterize real people, while showing how the biomyths serve to revivify constricting ideologies about sex and family. An original and fascinating book."—Ruth Hubbard, author of Exploding the Gene Myth and The Politics of Women's Biology

"A major advance for the science of human behavior and for thoughtful scholarship generally. Lancaster provides a comprehensive analysis of essentialized ideas about sexuality, gender, and sexual preference that are out there in American popular culture, and—alas!—reinforced by crappy science. He provides an immensely valuable counterpoint to the evolutionary psychology and behavioral genetics that everyone knows about, but that few are competent to consider critically. What a fun book!"—Jonathan Marks, author of What It Means to Be 98% Chimpanzee

"Provocative, witty, illuminating and politically pointed, The Trouble with Nature shows us how the flat-footed fixities of biological reductionism limit and constrain us, and why we need an expansive progressive political imagination to free us."—Lisa Duggan, co-author of Sex Wars: Sexual Dissent and Political Culture

"A funny, ironic, and learned account of a deeply serious topic: how the media and popular culture appropriate facts—real ones and fake ones—about biology in order to make claims about how human societies ought to be organized and understood. One might have hoped that David Hume back in the eighteenth century would have put a stop to such foolishness, but apparently not. Anyone needing an antidote to the current crop of popular socio-biology books flooding the market, anyone who needs convincing of the power of culture, should read this wonderful book."—Thomas Laqueur, author of Making Sex: Body and Gender from the Greeks to Freud

"Sex, lies and videotape. Culture wars, science wars, and it's the economy, stupid. With interdisciplinary brilliance and biting wit, Lancaster makes sad sense of sociobiology's contemporary renaissance while dissecting its popular and scholarly practitioners. But Lancaster's decidedly queer perspective connects science to shifting sexuality, family, and economic inequality in the cultural stew of the present. E.M. Forster famously adjured us to 'only connect.' What do Will and Grace have to do with post-Fordist economies? Journalists' 'just-so' stories about ducks and sex with the 9/11 terror? The Trouble with Nature connects us all, in surprisingly new ways."—Micaela di Leonardo, author of Exotics at Home: Anthropologies, Others, American Modernity

"The Trouble with Nature will be a valuable addition to my library. It is a book I will want to share with colleagues and students. A pleasure to read, it is full of insights about the place of sexuality in popular consciousness. Lancaster has written a personal and a political study, while avoiding many of the clichés too common in contemporary cultural criticism."—Lawrence Grossberg, Distinguished Professor of Communication Studies and Cultural Studies, University of North Carolina, Chapel Hill

ORIGINS STORIES
1. In the Beginning, Nature
2. The Normal Body
3. The Human Design
4. Our Animals, Our Selves

VARIETIES OF HUMAN NATURE: THE VIEW FROM ANTHROPOLOGY AND HISTORY
13. Marooned on Survivor Island
14. Selective Affinities: Commonalities and Differences in the Family of Man
15. The Social Body
16. The Practices of Sex

PERMUTATIONS ON THE "NATURE" OF DESIRE: THE GAY BRAIN, THE GAY GENE, AND OTHER TALES OF IDENTITY
17. This Queer Body
18. The Biology of the Homosexual
19. Desire Is Not a "Thing"
20. Familiar Patterns, Dangerous Liaisons

THE ENDS OF NATURE: THE WEIRD ANTINOMIES OF POSTMODERN MASS CULTURE
21. "Nature" in Quotation Marks
22. Money’s Subject
23. History and Historicity Flow through the Body Politic
24. The Politics of Dread and Desire
25. Sex and Citizenship in the Age of Flexible Accumulation