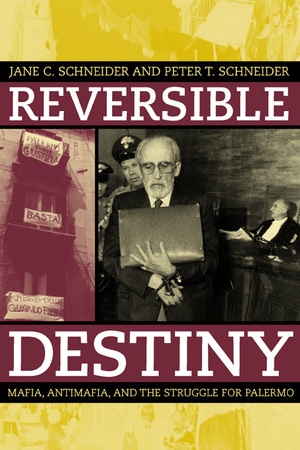 Reversible Destiny Mafia, Antimafia, and the Struggle for Palermo

Reversible Destiny traces the history of the Sicilian mafia to its nineteenth-century roots and examines its late twentieth-century involvement in urban real estate and construction as well as drugs. Based on research in the regional capital of Palermo, this book suggests lessons regarding secretive organized crime: its capacity to reproduce a subculture of violence through time, its acquisition of a dense connective web of political and financial protectors during the Cold War era, and the sad reality that repressing it easily risks harming vulnerable people and communities. Charting the efforts of both the judiciary and a citizen's social movement to reverse the mafia's economic, political, and cultural power, the authors establish a framework for understanding both the difficulties and the accomplishments of Sicily's multifaceted antimafia efforts.

“Beyond writing an excellent study of the origins and development of the Sicilian mafia and antimafia organizations, the Schneiders expertly craft an urban portrait of a troubled Palermo within broader social and political regional and national contexts.”—M. S. Miller, Emeritus, U. of Illinois at Chicago Choice: Current Reviews For Academic Libraries

"In Sicily politics, mafia, and social history are impenetrably entangled—or so I had thought until I read Reversible Destiny. The Schneiders have performed a near miracle: an accurate, objective, and very readable account of the Palermo anti-mafia movement, its roots, its accomplishments, its shortcomings, and its prospects. In a time when these prospects are ever bleaker, this should be obligatory reading for anyone concerned with the consequences of organized crime and corruption for civic life."—Mary Taylor Simeti, author, most recently, of Travels with a Medieval Queen

"Written by scholars renowned for both their expertise on Sicilian society and their political savvy, Reversible Destiny tells, for the first time, the story of the rise of the anti-mafia movement in Sicily. Eagerly awaited by scholars, it offers a highly readable examination of a fascinating topic."—David I. Kertzer, author of The Kidnapping of Edgardo Mortara

"Jane and Peter Schneider have done it again. Using a variety of ethnographic, documentary, interview, and judicial sources, combined with their deep knowledge of the Mafia, they document the rise of the anti-Mafia movement in Palermo, the reaction to it of the elite, and its varied impacts on the city's life. Far from utopian, their clear-eyed vision illuminates the deep roots of the Mafia's cultural legitimacy, the obstacles that the anti-Mafia movement has encountered, and the continuing struggle to build a civil society in the city."—Sidney Tarrow, author of Power in Movement: Social Movements and Contentious Politics