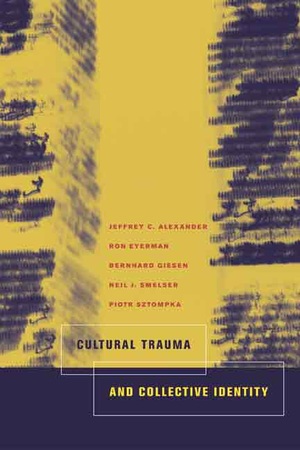 In this collaboratively authored work, five distinguished sociologists develop an ambitious theoretical model of "cultural trauma"—and on this basis build a new understanding of how social groups interact with emotion to create new and binding understandings of social responsibility. Looking at the "meaning making process" as an open-ended social dialogue in which strikingly different social narratives vie for influence, they outline a strongly constructivist approach to trauma and apply this theoretical model in a series of extensive case studies, including the Nazi Holocaust, slavery in the United States, and September 11, 2001.

"A timely and sophisticated series of studies. Articulating diverse strands of social theory with the historical episodes that have had major affective resonances within national cultures, the volume as a whole contributes significantly to our understanding of relationships between collective affect and social process."—Michael Shapiro, Professor of Political Science at the University of Hawaii

"The fine and deeply argued essays in this book build a strong case against a naturalistic theory of collective traumas. Traumas are made, not born, claim the authors. And they brilliantly cast a steely gaze on several social nightmares--the Nazi holocaust, slavery in the United States, September 11, 2001--in order to limn the social and cultural processes by which events come to be viewed as threatening to the very identity of collectivities. Ultimately this is a book about the nature of the very normative order that gives meaning to the human condition."—Robin Wagner-Pacifici, author of Theorizing the Standoff

"Near the end of the 20th century, scholarly interest in collective memory surged, spurred on both by re-examinations of the Holocaust and other canonical sources of trauma, and by the rise of a new set of institutionalized processes of collective memory-work. It is the great merit of these essays to approach the problems of collective trauma in sociological terms, as theorizable patterns in socially and culturally organized processes. This is a vital corrective to more naturalistic understandings and complement to those focused more narrowly on psychology or textual analysis."—Craig Calhoun, President, Social Science Research Council


"This interactive collection of essays breaks new ground in the sociology of trauma. With its rich range of empirical cases, this book will inspire new debates across the social sciences about memory, collective suffering, and coping."—Arjun Appadurai, Professor of International Studies, Yale University
Read More >