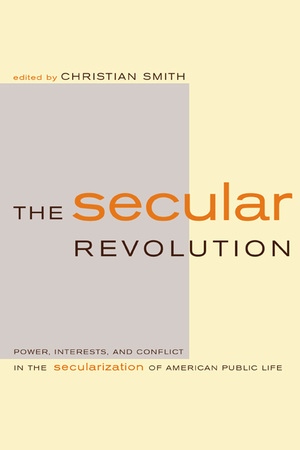 The Secular Revolution Power, Interests, and Conflict in the Secularization of American Public Life

Sociologists, historians, and other social observers have long considered the secularization of American public life over the past hundred and thirty years to be an inevitable and natural outcome of modernization. This groundbreaking work rejects this view and fundamentally rethinks the historical and theoretical causes of the secularization of American public life between 1870 and 1930. Christian Smith and his team of contributors boldly argue that the declining authority of religion was not the by-product of modernization, but rather the intentional achievement of cultural and intellectual elites, including scientists, academics, and literary intellectuals, seeking to gain control of social institutions and increase their own cultural authority.

Writing with vigor and a broad intellectual grasp, the contributors examine power struggles and ideological shifts in various social sectors where the public authority of religion has diminished, in particular education, science, law, and journalism. Together the essays depict a cultural and institutional revolution that is best understood in terms of individual agency, conflicts of interest, resource mobilization, and struggles for authority. Engaging both sociological and historical literature, The Secular Revolution offers a new theoretical framework and original empirical research that will inform our understanding of American society from the nineteenth to the twenty-first centuries. The ramifications of its provocative and cogent thesis will be felt throughout sociology, religious studies, and our general thinking about society for years to come.

Christian Smith is Professor and Associate Chair in the Department of Sociology at the University of North Carolina, Chapel Hill. He is the coauthor of Divided By Faith: Evangelical Religion and the Problem of Race in America (2001, with Michael O. Emerson), and the author of Christian America? What Evangelicals Really Want (California, 2000) and American Evangelicalism: Embattled and Thriving (1998).

“The book is a great contribution for those who seek to understand the very sociological meanings of the Death-of-God discourse at the level of praxis, and aspire to find out the best strategy for the re-sacralization of public life.”

“Worth study for its specific detail on how anti-Christian intellectual leaders substituted for biblical hope ‘their own visions of secular progress,’ and became famous and rich in the process. . . .Fascinating.”—Marvin Olasky, Univ. of Texas Pampa News (Tx)

"Smith provides the reader with a powerful new framework for assessing the secularization of American public life, including a wealth of new insights and historical evidence on religion in American institutions. For those interested in religion's changing role in the public arena, this is essential reading, certain to have tremendous impact."—Roger Finke, Professor of Sociology and Religious Studies at Penn State and coauthor of Acts of Faith: Explaining the Human Side of Religion

"Finally a much welcome sociological study of secularization that eschews assumptions of inevitability in favor of flesh-and-blood institutional histories, from the fields of education, journalism, and law to science, medicine, and even religion itself."—Ronald L. Numbers, Hilldale and William Coleman Professor of the History of Science and Medicine, University of Wisconsin-Madison, and author of The Creationists


"Secularization has long been talked about as if it were the inevitable product of vast impersonal forces operating above our heads. In this fascinating collection, the authors descend from the stratosphere to investigate the power struggles that actually brought about secularization in education, law, and journalism. A wonderful, arresting book that gives secularization a human face."—Nicholas Wolterstorff, author of John Locke and the Ethics of Belief

"This book is sure to evoke debate, agreement, contention, and future research by historians, sociologists, political scientists, and scholars of American religion."—Rhys H. Williams, editor, Journal for the Scientific Study of Religion
Read More >

3. Educational Elites and the Movement to Secularize Public Education:
The Case of the National Education Association
Kraig Beyerlein

4. The Positivist Attack on Baconian Science and Religious Knowledge
in the 1870s
Eva Marie Garroutte

5. Power, Ridicule, and the Destruction of Religious Moral Reform
Politics in the 1920s
P. C. Kemeny

6. “My Own Salvation”: The Christian Century and Psychology’s
Secularizing of American Protestantism
Keith G. Meador

10. After the Fall: Attempts to Establish an Explicitly Theological Voice
in Debates over Science and Medicine after 1960
John H. Evans 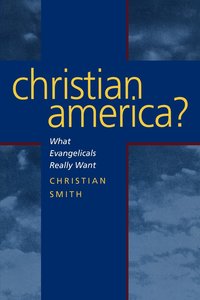