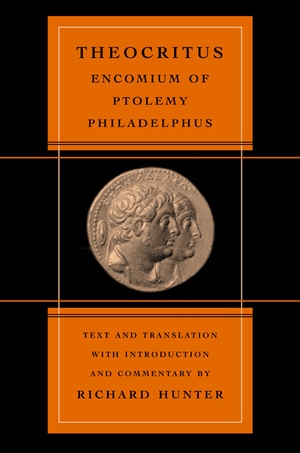 Under Ptolemy II Philadelphus, who ruled Egypt in the middle of the third century B.C.E., Alexandria became the brilliant multicultural capital of the Greek world. Theocritus's poem in praise of Philadelphus—at once a Greek king and an Egyptian pharaoh—is the only extended poetic tribute to this extraordinary ruler that survives. Combining the Greek text, an English translation, a full line-by-line commentary, and extensive introductory studies of the poem's historical and literary context, this volume also offers a wide-ranging and far-reaching consideration of the workings and representation of poetic patronage in the Ptolemaic age. In particular, the book explores the subtle and complex links among Theocritus's poem, modes of praise drawn from both Greek and Egyptian traditions, and the subsequent flowering of Latin poetry in the Augustan age.

As the first detailed account of this important poem to show how Theocritus might have drawn on the pharaonic traditions of Egypt as well as earlier Greek poetry, this book affords unique insight into how praise poetry for Ptolemy and his wife may have helped to negotiate the adaptation of Greek culture that changed conditions of the new Hellenistic world. Invaluable for its clear translation and its commentary on genre, dialect, diction, and historical reference in relation to Theocritus's Encomium, the book is also significant for what it reveals about the poem's cultural and social contexts and about Theocritus' devices for addressing his several readerships.

COVER IMAGE: The image on the front cover of this book is incorrectly identified on the jacket flap. The correct caption is: Gold Oktadrachm depicting Ptolemy II and Arsinoe (mid-third century BCE; by permission of the Museum of Fine Arts, Boston).

Richard Hunter is Regius Professor of Greek at Cambridge University. He is the author of many books, including Theocritus: A Selection (1999) and Theocritus and the Archaeology of Greek Poetry (1996).

"Current interest in interdisciplinary approaches to the Alexandrian culture is making it possible to understand Hellenistic texts in exciting new ways. Richard Hunter here brings to bear his superb skills as a commentator on one of the most neglected but culturally significant Hellenistic poems. He masterfully demonstrates how in composing his Encomium of Ptolemy Philadelphus Theocritus not only drew on the rich tradition of Greek encomiastic verse but also insinuated a double meaning for those knowledgeable in Egyptian culture. The result is a carefully nuanced study that will stand as a model for how to read texts from an intercultural perspective."—Kathryn J. Gutzwiller, author of Poetic Garlands: Hellenistic Epigrams in Context

"Richard Hunter demonstrates again his deftness as editor and commentator with this edition of Theocritus’s Encomium of Ptolemy. He provides this text, usually overlooked in the Theocritean corpus, with thoughtful historicizing and sophisticated literary contextualizations. For scholars and students alike the style is accessible and informative, and as a result the poem has become much more valuable for understanding the poetic dynamics of the early Ptolemaic period."—Susan Stephens, author of Seeing Double: Intercultural Poetics in Ptolemaic Alexandria

"The text of the Encomium is a nodal area for this truly interdisciplinary series, and Hunter has a special ability to connect with all the various issues and approaches: royal ideology and patronage, diction and tradition, material culture and ethnic identity. The result is both a lasting work of reference and an illuminating discussion of Alexandrian poetry in its evolving social context."—Alessandro Barchiesi, author of The Poet and the Prince

Introduction
1. Beginning from Zeus
2. Genre
3. Poets and Patrons
4. An Egyptian Dimension?
5. The Language of the Encomium
6. The Meter of the Encomium
7. A Note on the Transmission of the Text
Sigla
Theocritus, Encomium of Ptolemy Philadelphus
Commentary