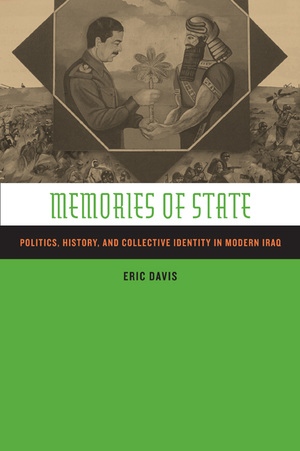 Despite being securely entrenched in power and having suppressed all political opposition, the Ba'thist regime that ruled Iraq from 1968 to 2003 still felt the need to engage in a massive rewriting of the nation's history and cultural heritage—in both its high and popular forms. As this book makes clear, the regime's effort to restructure understandings of the past was an attempt to expunge a powerful tendency in the Iraqi nationalist movement that advocated cultural pluralism, political participation, and social justice. Based on interviews with Iraqi intellectuals under the regime of Saddam Husayn, and with Iraqi expatriates and on publications from Iraq both before and during Ba'thist rule, Memories of State is an eye-opening look at one of the most important and misunderstood countries in the Middle East. This timely study also asks what the possibilities are for promoting civil society and a transition to democratic rule in post-Ba'thist Iraq.

Eric Davis is Professor of Political Science and former Director of the Center for Middle Eastern Studies at Rutgers University. He is author of Statecraft in the Middle East: Oil, Historical Memory, and Popular Culture (1991) and Challenging Colonialism: Bank Misr and Egyptian Industrialization, 1920-1941 (1983).

“Davis captures the fascinating and above all self-conscious process that was used by the [Hussein’s] family to dominate the Baath Party.”—Noah Feldman Washington Post Book World

“Eric Davis eschews traditional histories of Iraq that have tended to emphasize political personalities and struggles amongst them, and focuses instead on the relationships between culture and political control, civil society and state institutions, and intellectuals and policy makers. The result is an innovative and multi-layered analysis that is a pleasure to read.”—Adeed Dawish, author or Arab Nationalism in the Twentieth Century: From Triumph to Despair

"Eric Davis's book is a truly impressive tour de force of the cultural history of modern Iraq and the political struggles over the appropriation of national culture and memory. It is based not only on meticulous and detailed research, but also a thorough familiarity and sympathy with Iraqi society. Davis offers a particularly valuable cultural and intellectual history of modern Iraq, a country that has appeared in Western public discourse primarily in terms of its geo-political aspects and the bloody regime which ruled it until recent times."—Sami Zubaida, author of Law and Power in the Islamic World