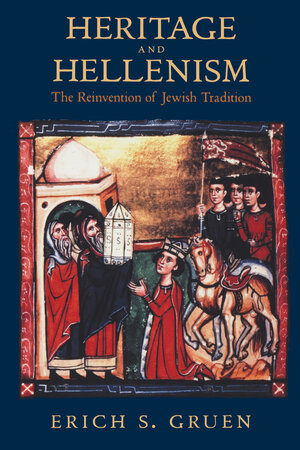 Heritage and Hellenism The Reinvention of Jewish Tradition

The interaction of Jew and Greek in antiquity intrigues the imagination. Both civilizations boasted great traditions, their roots stretching back to legendary ancestors and divine sanction. In the wake of Alexander the Great's triumphant successes, Greeks and Macedonians came as conquerors and settled as ruling classes in the lands of the eastern Mediterranean. Hellenic culture, the culture of the ascendant classes in many of the cities of the Near East, held widespread attraction and appeal. Jews were certainly not immune. In this thoroughly researched, lucidly written work, Erich Gruen draws on a wide variety of literary and historical texts of the period to explore a central question: How did the Jews accommodate themselves to the larger cultural world of the Mediterranean while at the same time reasserting the character of their own heritage within it? Erich Gruen's work highlights Jewish creativity, ingenuity, and inventiveness, as the Jews engaged actively with the traditions of Hellas, adapting genres and transforming legends to articulate their own legacy in modes congenial to a Hellenistic setting. Drawing on a diverse array of texts composed in Greek by Jews over a broad period of time, Gruen explores works by Jewish historians, epic poets, tragic dramatists, writers of romance and novels, exegetes, philosophers, apocalyptic visionaries, and composers of fanciful fables—not to mention pseudonymous forgers and fabricators. In these works, Jewish writers reinvented their own past, offering us the best insights into Jewish self-perception in that era.

Erich S. Gruen is Gladys Rehard Wood Professor of History and Classics at the University of California, Berkeley. He is the author of The Last Generation of the Roman Republic (California, 1974), The Hellenistic World and the Coming of Rome (California, 1984), Studies in Greek Culture and Roman Policy (1990), Culture and National Identity in Republican Rome (1992), and Diaspora: Jews amidst the Greeks and Romans (forthcoming).

"This excellent volume focuses on the writings of Jews in Greek and shows clearly that they are not to be seen as apologetic or defensive writings but as evidencing the vitality and creativity of a self-confident Judaism. . . . A book of broad scholarly interest to both scholars and everyone interested in the development of Judaism."—Robert Doran, Amherst College