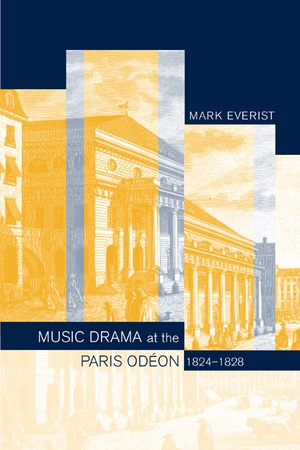 Parisian theatrical, artistic, social, and political life comes alive in Mark Everist's impressive institutional history of the Paris Odéon, an opera house that flourished during the Bourbon Restoration. Everist traces the complete arc of the Odéon's short but highly successful life from ascent to triumph, decline, and closure. He outlines the role it played in expanding operatic repertoire and in changing the face of musical life in Paris.

Everist reconstructs the political power structures that controlled the world of Parisian music drama, the internal administration of the theater, and its relationship with composers and librettists, and with the city of Paris itself. His rich depiction of French cultural life and the artistic contexts that allowed the Odéon to flourish highlights the benefit of close and innovative examination of society's institutions.

Mark Everist is Professor of Music at the University of Southampton. He is the author of French Motets in the Thirteenth Century: Music, Poetry, and Genre (1994) and Polyphonic Music in Thirteenth-Century France (1989), as well as editor of three of the volumes in the series Le Magnus liber organi de Notre-Dame de Paris.

"Everist’s book is best seen as a statement of faith in writing about music theatre, for the future, in a new way, respecting legal as well as social fashions."—Times Literary Supplement (TLS)