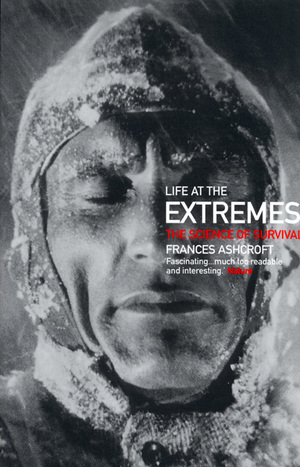 Life at the Extremes The Science of Survival

Go straight to excerpt of interest: Mountain climbing and altitude
Diving and pressure
Running, cycling, and working out
Space and weightlessness

Life at the Top

Of considerable importance to climbers, and to those who live and work permanently at altitude, is their capacity to do work. Clearly, the harder you are working (the faster you climb), the more oxygen will be needed. For lowlanders, the ability to do work falls rapidly at altitude: the work capacity at 7000 metres is less than 40 per cent of that at sea-level. Without oxygen, the rate of climb can be very slow indeed: in 1952 it took Raymond Lambert and Tenzing Norgay five and a half hours to climb just 200 metres on the South Col of Everest; and at the summit of the mountain, Reinhold Messner found that he and Peter Habeler collapsed into the snow with exhaustion every few steps, so that the last 100 metres took over an hour.

The challenge of scaling the highest mountain, exploring the deepest ocean, crossing the hottest desert, or swimming in near-freezing water is irresistible to many people. Life at the Extremes is an engrossing exploration of what happens to our bodies in these seemingly uninhabitable environments. Frances Ashcroft weaves stories of extraordinary feats of endurance with historical material and the latest scientific findings as she investigates the limits of human survival and the remarkable adaptations that enable us to withstand extreme conditions.

What causes mountain sickness? How is it possible to reach the top of Everest without supplementary oxygen, when passengers in an airplane that depressurized at the same altitude would lose consciousness in seconds? Why do divers get the bends but sperm whales do not? How long you can survive immersion in freezing water? Why don't penguins get frostbite? Will men always be faster runners than women? How far into deep space can a body travel?

As she considers these questions, Ashcroft introduces a cast of extraordinary scientific personalities—inventors and explorers who have charted the limits of human survival. She describes many intriguing experiments and shows how scientific knowledge has enabled us to venture toward and beyond ever greater limits. Life at the Extremes also considers what happens when athletes push their bodies to the edge, and tells of the remarkable adaptations that enable some organisms to live in boiling water, in highly acidic lakes, or deep in the middle of rocks.

Anyone who flies in an airplane, sails the high seas, goes skiing or walking in the mountains, or simply weathers subzero winters or sweltering summers will be captivated by this book. Full of scientific information, beautifully written, and packed with many fascinating digressions, Life at the Extremes lures us to the very edge of human survival.

Frances Ashcroft is Professor of Physiology at Oxford University and a Fellow of Trinity College, Oxford. She is author of Insulin (1992) and Ion Channels and Disease (2000).