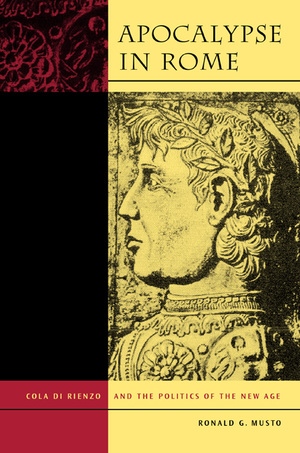 On May 20, 1347, Cola di Rienzo overthrew without violence the turbulent rule of Rome’s barons and the absentee popes. A young visionary and the best political speaker of his time, Cola promised Rome a return to its former greatness. Ronald G. Musto’s vivid biography of this charismatic leader—whose exploits have enlivened the work of poets, composers, and dramatists, as well as historians—peels away centuries of interpretation to reveal the realities of fourteenth-century Italy and to offer a comprehensive account of Cola’s rise and fall.

A man of modest origins, Cola gained a reputation as a talented professional with an unparalleled knowledge of Rome’s classical remains. After earning the respect and friendship of Petrarch and the sponsorship of Pope Clement VI, Cola won the affections and loyalties of all classes of Romans. His buono stato established the reputation of Rome as the heralded New Jerusalem of the Apocalypse and quickly made the city a potent diplomatic and religious center that challenged the authority—and power—of both pope and emperor.

At the height of Cola’s rule, a conspiracy of pope and barons forced him to flee the city and live for years as a fugitive until he was betrayed and taken to Avignon to stand trial as a heretic. Musto relates the dramatic story of Cola’s subsequent exoneration and return to central Italy as an agent of the new pope. But only weeks after he reestablished his government, he was slain by the Romans atop the Capitoline hill.

In his exploration, Musto examines every known document pertaining to Cola’s life, including papal, private, and diplomatic correspondence rarely used by earlier historians. With his intimate knowledge of historical Rome—its streets and ruins, its churches and palaces, from the busy Tiber riverfront to the lost splendor of the Capitoline—he brings a cinematic flair to this fascinating historical narrative.

Ronald G. Musto is publisher of Italica Press in New York City and codirector of the History E-Book Project for the American Council of Learned Societies. His books include The Catholic Peace Tradition (1986), Liberation Theologies (1991), and Renaissance Society and Culture (coedited with John Monfasani, 1991).

“This splendid study of Cola’s life...will long remain the master study of this complex figure and his times. Essential.”—E. Peters Choice: Current Reviews For Academic Libraries

“This splendid study of Cola's life and the forces he encountered, manipulated, and was destroyed by is as definitive, learned, and eloquent as one could hope for, and will long remain the master study of this complex figure and his times.”—E. Peters, U. ov Pennsylvania Choice: Current Reviews For Academic Libraries

“Written with verve...Musto offers a much richer account of Rienzo’s career and aims than has ever been offered.”—David Abulafia Times Literary Supplement (TLS)

"Musto's work will stand alone as the definitive new study…. He is able to bring to life the choices and dilemmas that Cola faced, yet he is absolutely honest about what we cannot know or understand. Musto understands the institutions and mores of medieval Italy very well. [His] style is distinguished for its elegance, richness of vocabulary, and felicity of expression."—Benjamin G. Kohl, author of Padua under the Carrara, 1318-1405

Introduction
1 Birth, Youth, and Society
2 Education, Profession, and Family
3 Reviving Antiquity
4 The Popes at Avignon
5 Cola and the Barons
6 Preparing for the Apocalypse
7 Pentecost
8 The
9 Cola and the World
10 War with the Barons
11 Abdication and Exile
12 Last World Emperor and Angel Pope
13 Apocalypse in Rome