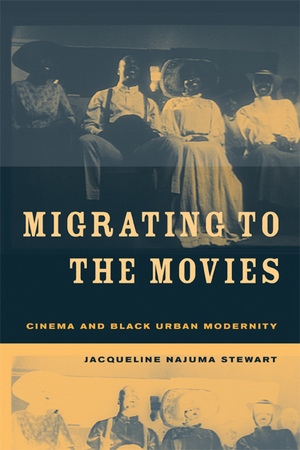 Migrating to the Movies Cinema and Black Urban Modernity

The rise of cinema as the predominant American entertainment around the turn of the last century coincided with the migration of hundreds of thousands of African Americans from the South to the urban "land of hope" in the North. This richly illustrated book, discussing many early films and illuminating black urban life in this period, is the first detailed look at the numerous early relationships between African Americans and cinema. It investigates African American migrations onto the screen, into the audience, and behind the camera, showing that African American urban populations and cinema shaped each other in powerful ways.

Focusing on Black film culture in Chicago during the silent era, Migrating to the Movies begins with the earliest cinematic representations of African Americans and concludes with the silent films of Oscar Micheaux and other early "race films" made for Black audiences, discussing some of the extraordinary ways in which African Americans staked their claim in cinema's development as an art and a cultural institution.

Jacqueline Najuma Stewart is a University of Chicago Professor of cinema studies and director of the nonprofit arts organization, Black Cinema House..

“Jacqueline Stewart's important study . . . is a welcome addition to the limited scholarship on the negative black stereotypes in early cinema, the experiences of black moviegoers, and the cultural evolution of African Americans in urban America. . . . The study should prove helpful to graduate students, film historians, and those researchers who understand that the early cinema developed as a popular leisure-time activity simultaneously with the movement of hundreds of thousands of southern African Americans to northern and midwestern cities during the Great Migraton.”—Journal of African American History

"A major contribution not only to Film Studies, but the fields of African American Studies and cultural history as well. In each of these areas, she takes the state of the questions to a new level. With rigor, insight, and eloquence, Stewart approaches a number of important topics including the nature of American cinema before 1920, the formation of African American film culture, and the impact on everyday experience of the Great Migration of Southern blacks to the North in the period through World War I. . . . Stewart’s book endlessly provokes and often inspires the reader to pursue some of her analyses into new areas."—Film Quarterly

"Migrating to the Movies provides an important addition to the film studies literature. Incorporating an impressive mixture of theoretical perspectives (e.g., cultural studies, feminist, postcolonial, psychoanalytic), Stewart does an excellent job of shifting between narrative texts, visual imagery, film spectatorship, cultural production, and historical context—tapping into all cylinders of the cinematic apparatus. . . . Highly suited and strongly recommended for film, ethnic, or cultural studies audiences. It is equally recommended for any advanced interdisciplinary readers who wish to learn more about how early American films and filmgoers struggled to define their respective roles in a multicultural America decades before America itself was fully able to acknowledge, or even realize, its multiculturalism."—American Journal of Sociology

“This rich book expands the scholarship on blacks in cinema, on early cinema, and on the 20th-century social and cultural history of African Americans. . . . Essential.”—CHOICE

"The book makes a substantial contribution to black film studies, raises questions in need of further investigation, and offers a new vision of film and social history."—Black Camera

"Through extensive, finely detailed research and well judged interpretation, Stewart recovers what was at stake in the production of images and narratives that sought to describe the "reality" of black people in the raw, new medium of silent-era film."—Indiana Magazine of History

"With this book, Stewart establishes herself as the authority on early Black cinema. The historiography is meticulous, original and compelling. Stewart puts theory and history into productive conversation. An extremely important work."—Linda Williams, author of Playing the Race Card

"As a child in West Virginia, I loved the movies, but I had little idea that my people's history was being constructed (and deconstructed) as I watched them. Jacqueline Najuma Stewart's bold new book lets us see how black history was, in part, made at the movies. The history of the Great Migration has rarely been so vivid or compelling."—Henry Louis Gates, Jr., author of America Behind the Color Line: Dialogues with African Americans

"Jacqueline Stewart's Migrating to the Movies finally brings the unmistakable sparkle of brilliance to the field of racial constructions in early cinema. Part of Stewart's magic in this book is her substantial gift for critical insight, while the other part of this inimitable brew is her uncanny grasp of this particular topic. As an avid student of silent film for the past decade, I've been patiently waiting for a work that would juggle the obvious sociological weight of the raw material while also grappling with the technological and aesthetic complexities at stake. Migrating to the Movies is the first book to achieve this, and it is an indispensable volume on racial constructions of vision and the scopic gaze in the early twentieth century."—Michele Wallace, author of Dark Designs and Visual Culture

Contents
List of Illustrations
Preface
Acknowledgments
Introduction A Nigger in the Woodpile: Black (In)Visibility in Film History
Part One: Onto the Screen
Chapter 1. "To Misrepresent a Helpless Race": The Black Image Problem
Chapter 2. Mixed Colors: Riddles of Blackness in Preclassical Cinema
Part Two: Into the Audience
Chapter 3. "Negroes Laughing at Themselves"? Black Spectatorship and the Performance of Urban Modernity
Chapter 4. "Some Thing to See Up Here All the Time": Moviegoing and Black Urban Leisure in Chicago
Chapter 5. Along the "Stroll": Chicago’s Black Belt Movie Theaters
Part Three: Behind the Camera
Chapter 6. Reckless Rovers versus Ambitious Negroes: Migration, Patriotism, and the Politics of Genre in Early African American Filmmaking
Chapter 7 "We Were Never Immigrants": Oscar Micheaux and the Reconstruction of Black American Identity
Conclusion
Notes
Bibliography
Index