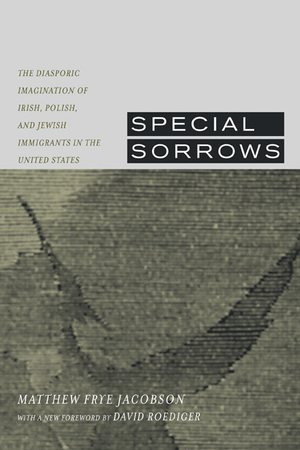 Special Sorrows The Diasporic Imagination of Irish, Polish, and Jewish Immigrants in the United States, With a New Foreword by David Roediger

"A scholarly study of the real roots of what Jacobson calls 'America's largely assimilated but ultimately "unmeltable" ethics.' It's a startling point of view for readers who are accustomed to the self-congratulatory myth of America as a beacon of liberty to which the 'huddled masses' of the world look with longing."—Jonathan Kirsch, Los Angeles Times

Matthew Frye Jacobson is Professor of American Studies at Yale University and author of Whiteness of a Different Color (1998) and Barbarian Virtues (2000).

"Jacobson's book impressively lives up to its stark and splendid title, which is borrowed from Polish-Jewish revolutionary Rosa Luxemburg's capsule description of the bonds uniting people into nations. For the immigrants whom Jacobson considers, nationalist sorrows seemed especially tragic, as they were felt and resisted in exile from the nations whose causes were being championed. Special Sorrows carefully delineates the centrality of Jewish, Polish and Irish supporters in the United States to national liberation movements abroad and, as expertly, details how such movements shaped immigrant life in the United States."—David Roediger, from the Foreword

I. THE CULTURE OF THE DIASPORA
1. Exiles, Pilgrims, Wanderers: Migration in the Context of National Struggle
2. Plaintive Song, Heroic Story: Nationalism and Immigrant Popular Culture
3. Pillars of Fire: The Comparative Literatures of Immigrant Nationalism

Conclusion: The Diasporic Imagination in the Twentieth Century
Afterword to the 2002 Edition
Glossary of Names
Notes
Index