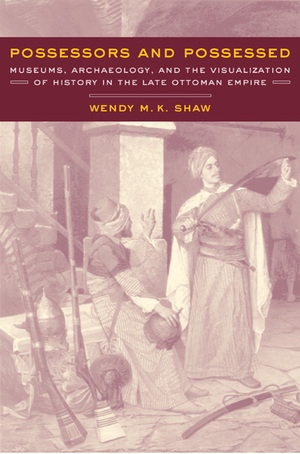 Possessors and Possessed Museums, Archaeology, and the Visualization of History in the Late Ottoman Empire

Possessors and Possessed analyzes how and why museums—characteristically Western institutions—emerged in the late-nineteenth-century Ottoman Empire. Shaw argues that, rather than directly emulating post-Enlightenment museums of Western Europe, Ottoman elites produced categories of collection and modes of display appropriate to framing a new identity for the empire in the modern era. In contrast to late-nineteenth-century Euro-American museums, which utilized organizational schema based on positivist notions of progress to organize exhibits of fine arts, Ottoman museums featured military spoils and antiquities long before they turned to the "Islamic" collections with which they might have been more readily associated. The development of these various modes of collection reflected shifting moments in Ottoman identity production. Shaw shows how Ottoman museums were able to use collection and exhibition as devices with which to weave counter-colonial narratives of identity for the Ottoman Empire. Impressive for both the scope and the depth of its research, Possessors and Possessed lays the groundwork for future inquiries into the development of museums outside of the Euro-American milieu.

“A fine contribution to the subject and contains many stimulating insights. . . . The research is pertinent, the illustrations are fascinating, and the linking of historical detail with theoretical concepts—a difficult task at the best of times—is well done.”—Stephen Vernoit Current Anthropology

“A valuable source for specialists and engaging reading for the general reader.”—Alhmet Ersoy Middle East Journal

“Her book is an essential contribution to Ottoman cultural history as well as to museum studies.”—Yakup Bektas Technology And Culture