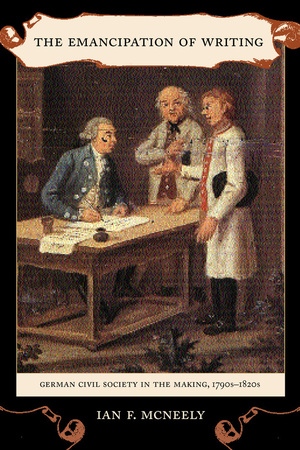 The Emancipation of Writing German Civil Society in the Making, 1790s–1820s

The Emancipation of Writing is the first study of writing in its connection to bureaucracy, citizenship, and the state in Germany. Stitching together micro- and macro-level analysis, it reconstructs the vibrant, textually saturated civic culture of the German southwest in the aftermath of the French Revolution and Napoleon's invasions. Ian F. McNeely reveals that Germany's notoriously oppressive bureaucracy, when viewed through the writing practices that were its lifeblood, could also function as a site of citizenship. Citizens, acting under the mediation of powerful local scribes, practiced their freedoms in written engagements with the state. Their communications laid the basis for civil society, showing how social networks commonly associated with the free market, the free press, and the voluntary association could also take root in powerful state institutions.

Ian F. McNeely is Assistant Professor at the University of Oregon.

“Groundbreaking. . . . A genial contribution to the current scholarship of German culture and society.”—Diane J. Guido European Legacy: Toward New Paradigms

"A superbly crafted major intervention into the hotly contested issue of German civil society - its origins, formation, and fate. McNeely turns the tables on deconstructive approaches to formalism in writing and shows how writing was thoroughly implicated in state power and corporate culture."—David Sabean, author of Kinship in Neckarhausen, 1700-1870

"This work's use of archival evidence to overhaul grand theory puts it in a league of its own. McNeely crafts a startlingly original argument about the inventions of citizenship and of modern political culture. It will be required if unsettling reading for anyone pondering the legacies of Tocqueville, Habermas, or Foucault."—Richard Biernacki, author of The Fabrication of Labor: Germany and Britain, 1640-1914

PART I
OFFICIAL POWER AND THE PAPER TRAIL

Chapter 6 Reading, writing, and reform
Edicts: the letter of the law
Sociography and enforcement
Knowledge entrepreneurs