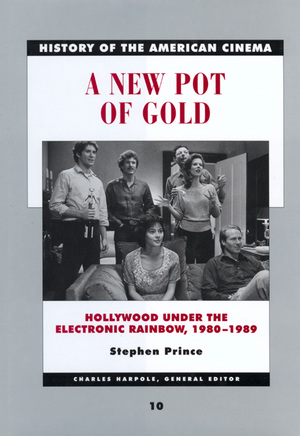 A New Pot of Gold Hollywood under the Electronic Rainbow, 1980–1989

Facing an economic crisis in the 1980s, the Hollywood industry moved boldly to control the ancillary markets of videotape, video disk, pay-cable and pay-per-view, and the major studios found themselves targeted for acquisition by global media and communications companies. This volume examines the decade's transformation that took Hollywood from the production of theatrical film to media software.

Some of the films discussed in this volume include:

Do the Right Thing

Stephen Prince is Professor of Communication Studies at Virginia Tech. His books include The Warrior's Camera: The Cinema of Akira Kurosawa (1999); Savage Cinema: Sam Peckinpah and the Rise of Ultraviolent Movies (1998); and Visions of Empire: Political Imagery in Contemporary American Films (1992).

"Stephen Prince's A New Pot of Gold is good at sustaining a coherent historical narrative and critical commentary on the 1980s--a period when video and film grew closer together, and when Hollywood came under the control of global capitalism."—James O. Naremore, author of Acting in the Cinema