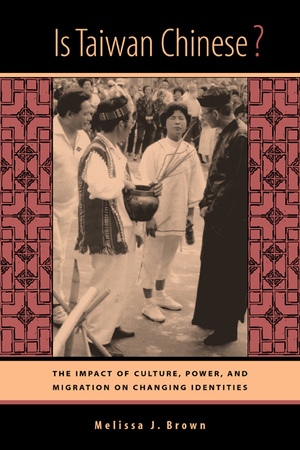 Is Taiwan Chinese? The Impact of Culture, Power, and Migration on Changing Identities

The "one China" policy officially supported by the People's Republic of China, the United States, and other countries asserts that there is only one China and Taiwan is a part of it. The debate over whether the people of Taiwan are Chinese or independently Taiwanese is, Melissa J. Brown argues, a matter of identity: Han ethnic identity, Chinese national identity, and the relationship of both of these to the new Taiwanese identity forged in the 1990s. In a unique comparison of ethnographic and historical case studies drawn from both Taiwan and China, Brown's book shows how identity is shaped by social experience—not culture and ancestry, as is commonly claimed in political rhetoric.

Melissa J. Brown is Assistant Professor of Anthropological Sciences at Stanford University. She is the editor of Negotiating Ethnicities in China and Taiwan (1996).

“An important contribution to the anthropology of identity. . . . I thus strongly recommend her book for all scholars interested in better understanding Taiwan and its historical relationship with China.”—Scott Simon American Ethnologist

“A balanced treatment of a politically charged topic. The volume is well researched and its argument is based on thoughtful analysis of important and unique sources. It contributes considerably to our understanding of the role of culture, power and demographics in shaping identity. Anyone interested in Taiwan studies, the Taiwan-PRC question or questions of regionalism and identity in China should read this.”—J. Megan Greene China Quarterly

"Insightful analysis . . . her data are enriched by oral histories recorded. Scholars and students of identity, ethnicity, and nationalism will find Brown's study useful and instructive."—Emily Mei-Hwa Lee The China Journal

"In this eye opening book, Melissa Brown shines an illuminating light on the divisive political issues now facing China and Taiwan as both struggle over how Taiwan's future will be decided. If identity has profoundly and rapidly changed in Taiwan over the past fifteen years, as she persuasively argues, extraordinary skill, patience, and luck will be needed on both sides if a mutually acceptable political settlement is ever to become a reality."—Ramon H. Myers, Senior Fellow and Consultant to Hoover Archives, Hoover Institution at Stanford.

1. What’s in a Name? Culture, Identity, and the "Taiwan Problem"
2. Where Did the Aborigines Go? Reinstating Plains Aborigines in Taiwan’s History
3. "We Savages Didn’t Bind Feet": Culture, Colonial Intervention, and Long-Route Identity Change
4. "Having a Wife is Better than Having a God": Ancestry, Governmental Power, and Short-Route Identity Change
5. "They Came With Their Hands Tied Behind Their Backs": Forced Migrations, Identity Changes, and State Classification in Hubei
6. Theory and Politics: Understanding Choices at the Border to Han