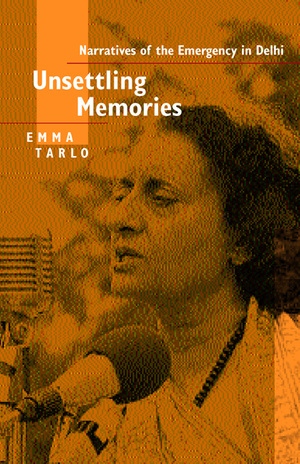 Unsettling Memories Narratives of the Emergency in Delhi

This richly detailed ethnographic work tells the story of a period of deep civil unrest in India . In 1975 Indira Gandhi declared a state of emergency which gave her the power to silence opposition through arrests and censorship and to introduce a new program of reform which included the draconian campaigns of slum clearance and family planning. In the capital city of Delhi access to basic civic amenities became dependent on the production of a sterilization certificate. For many of the city's poorest inhabitants whose homes had been demolished, the choice was between sterilization or homelessness.

Unsettling Memories provides a gripping analysis of how state oppression was orchestrated and experienced in Delhi during the Emergency. Using personal narratives and previously unstudied archival material, it traces the process by which policies were subverted at the local level through a combination of violence, trickery and market forces. It fills a significant gap in the recent political history of India, shedding light on a period many would rather forget. Its documentation and analysis of the relationship between state archives and lived experience is methodologically innovative, charting new ground for anthropologists and political scientists concerned with the role of the state in everyday life.

Emma Tarlo is Lecturer in Social Anthropology at Goldsmiths College, University of London, and author of Clothing Matters: Dress and Identity in India (1996), winner of the Ananda Kentish Coomarswamy Prize in 1998.

“Powerful. . . . In mixing fieldwork interviews with archival research and a sensitive reading of published texts, Tarlo has provided the model for a historical anthropology of the crisis-inducing and crisis-ladien modernization campaign.”—Gregory Clancey, National Univ. of Singapore Asian Journal Of Social Science

“This is a fascinating, well-written and witty book.”—Werner Menski South Asia Research