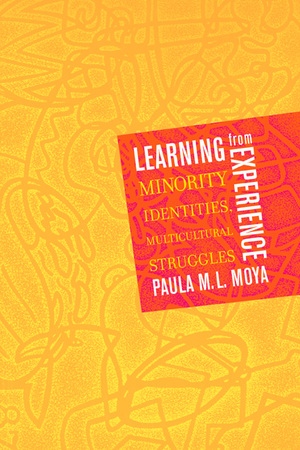 In Learning from Experience, Paula Moya offers an alternative to some influential philosophical assumptions about identity and experience in contemporary literary theory. Arguing that the texts and lived experiences of subordinated people are rich sources of insight about our society, Moya presents a nuanced universalist justification for identity-based work in ethnic studies.

This strikingly original book provides eloquent analyses of such postmodernist feminists as Judith Butler, Donna Haraway, Norma Alarcón, and Chela Sandoval, and counters the assimilationist proposals of minority neoconservatives such as Shelby Steele and Richard Rodriguez. It advances realist proposals for multicultural education and offers an understanding of the interpretive power of Chicana feminists including Cherríe Moraga, Gloria Anzaldúa, and Helena María Viramontes. Learning from Experience enlarges our concept of identity and offers new ways to situate aspects of race, gender, class, and sexual orientation in discursive and sociopolitical contexts.

Paula M. L. Moya is Assistant Professor of English at Stanford University and coeditor of Reclaiming Identity: Realist Theory and the Predicament of Postmodernism (California, 2000).

"In this volume, Paula Moya provides a comprehensive and astute reading of Chicana literature and literary criticism, as well as an important critique of postmodern theory as it bears on literary criticism and especially the debates over experience, social identity and multiculturalism. Moya is one of the most original and powerful new voices in feminist and postcolonial theory today, offering a needed corrective of some of the current dogmatisms in social theory. Learning from Experience offers a refreshing new take on the debates over experience, . . . I doubt its importance can be overestimated."—Linda Martín Alcoff, author of Real Knowing: New Versions of the Coherence Theory

"Learning from Experience is a refreshingly provocative and incisively written work that challenges fashionable dismissals of identity politics. In so doing it reaffirms the primacy of discursive and socio-political contexts and the epistemic value of experience. Moya's stimulating work has much to offer."—Rosaura Sánchez, author of Telling Identities, and most recently co-author with Beatrice Pita of Conflicts of Interest: The Letters of Maria Amparo Ruiz de Burton

Acknowledgments
Introduction: Identity in the Academy and Beyond
1. Postmodernism, Realism, and the Politics of Identity: Cherríe Moraga and Chicana Feminism
2. Chicana Feminism and Postmodernist Theory
3. Cultural Particularity vs. Universal Humanity: The Value of Being Asimilao
4. Learning How to Learn from Others: Realist Proposals for Multicultural Education
5. Reading as a Realist: Expanded Literacy in Helena María Viramontes’s Under the Feet of Jesus
Bibliography
Index