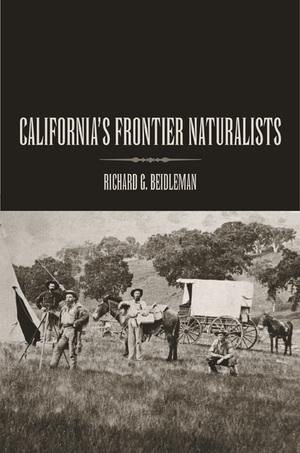 This book chronicles the fascinating story of the enthusiastic, stalwart, and talented naturalists who were drawn to California’s spectacular natural bounty over the decades from 1786, when the La Pérouse Expedition arrived at Monterey, to the Death Valley expedition in 1890–91, the proclaimed “end” of the American frontier. Richard G. Beidleman’s engaging and marvelously detailed narrative describes these botanists, zoologists, geologists, paleontologists, astronomers, and ethnologists as they camped under stars and faced blizzards, made discoveries and amassed collections, kept journals and lost valuables, sketched flowers and landscapes, recorded comets and native languages. He weaves together the stories of their lives, their demanding fieldwork, their contributions to science, and their exciting adventures against the backdrop of California and world history.

California's Frontier Naturalists covers all the major expeditions to California as well as individual and institutional explorations, introducing naturalists who accompanied boundary surveys, joined federal railroad parties, traveled with river topographical expeditions, accompanied troops involved with the Mexican War, and made up California’s own geological survey. Among these early naturalists are famous names—David Douglas, Thomas Nuttall, John Charles Fremont, William Brewer—as well as those who are less well-known, including Paolo Botta, Richard Hinds, and Sara Lemmon.

Richard G. Beidleman is Professor Emeritus of Biology at The Colorado College, and Research Associate at the University and Jepson Herbaria, University of California, Berkeley. He is coauthor, with L.H. Beidleman and B.E. Willard, of Plants of Rocky Mountain National Park (2000), and, with R.R. Beidleman and L.H. Beidleman, of Annotated Bibliography of Colorado Vertebrate Zoology, 1776–1995 (2000).

“The book treats California’s natural world with such wonder, curiosity, and respect, it will leave you reluctant to return to the real world.”—Bay Nature

“The time line for this engaging book extends from oceanic explorations in the 1780s (which seldom ventured far inland) to the Death Valley Expedition 200 years later. . . . The book includes useful one-page introductions to each section. The accounts themselves are much more than biographical information and descriptions of major discoveries for each naturalist. Stories of hardships, personalities, motivations, and interpersonal relationships enliven the text. . . . this well-written book effectively conveys a sense of that diversity and of the men and women who first discovered and explored it.”—D.A. Lovejoy Choice: Current Reviews For Academic Libraries

“Easy and fascinating reading. It will enhance the reader’s existing appreciation for favorite plants as they discover the who, what, and where of many of their discoveries.”—Fremontia

"In California's Frontier Naturalists, Richard Beidleman has eloquently chronicled the history of explorations and discovery that revealed the grand legacy of California's biodiversity. More than just a series of scholarly essays about naturalists, collections, and species, this book provides lively insight into the motivation that lured diverse naturalists to California's 'natural cornucopia', their personalities, their remarkable experiences, and their lasting contributions."—Dieter Wilken, Santa Barbara Botanic Garden